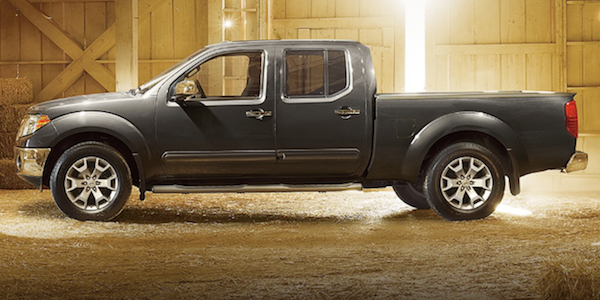 The 2016 Nissan Frontier sales were smokin’ hot for August. Why is the outdated truck selling so well?
Advertisement

The Nissan Frontier pickup needs a new redesign, but it isn’t stopping mid-size pickup buyers from snatching the outdated model up quickly. Nissan USA reports, the 2016 Frontier pickup is selling like crazy and flying off dealer lots. It leads the brand in percentage of increase with an incredible 161.6 percent increase over the previous August.

The mid-size pickup market is hot with the Toyota Tacoma, Chevy Colorado and GMC Canyon all enjoying strong sales. The Nissan Frontier is getting a redesign in 2018 and will get new exterior styling, an updated interior and new engines. Until then, Frontier is outselling it’s stablemates in percentage of increase.

A new turbo diesel for Frontier

The Frontier is due for a complete makeover and it’s coming in 2018. It will get new engines with one of them being a turbo diesel. Nissan recently brought a prototype Frontier pickup with 2.8-liter Cummins Turbo Diesel engine to a press event. This was the same vehicle Nissan brought to the Chicago Auto Show in 2014. The new Frontier diesel prototype had around 200hp and 350 lb. ft of torque.

It comes mated to an 8-speed ZF automatic transmission. The fuel economy improvement should be around 30 percent over the comparable Frontier V6 gas powerplant according to Nissan sources. Look for a Frontier with a Cummins diesel option when the new model arrives.

Until the 2018 Nissan Frontier gets here, the current generation mid-size pickup is hot. Truck buyers are snatching up the 2016 Frontiers as fast as Nissan can build them. What will happen when the new-generation models arrive? It should be an even stronger contender with the Tacoma, Colorado and Canyon trucks.

Soakee wrote on September 2, 2016 - 11:01am Permalink
Could it be that it is the closest thing to a truly "small" truck that Americans can buy? Automakers: get a clue!
Rick Marsh wrote on August 9, 2017 - 7:36pm Permalink
I totally agree!
Dave wrote on September 3, 2016 - 12:06am Permalink
Price is certainly the reason the Frontier has the best value for price quotient The new one will arrive this fall or next spring ,not certain a diesel will make it into the line up but a heavily revised v6 will perhaps even a 3.0 liter TT version. along with an 8 speed ZF transmission or a 7 speed. either way mpg will be up and power will be up. The Frontier being built off the Titan platform makes a lot of sense.
James D wrote on September 7, 2016 - 12:28pm Permalink
The old school Nissan Frontier is a superior mid size pickup to the Chevy, GMC, and Toyota. That is why it is selling so well. Its only draw back is MPG to the Chevy/GMC, other wise the Frontier is a superior built truck.
TV wrote on September 9, 2016 - 2:21pm Permalink
It's most likely due to the price and familiarity. Everyone knows what a Frontier is; everyone knows what to expect at this point. And since it undercuts all it's competitors in bang for the buck for what you are spending. It makes sense for new buyers to get it over the redesigned Tacoma and relatively new GM twins. And the Honda is probably too unorthodox for most pickup truck buyers. In short; you'll have a lot of questions going into buying the other new trucks; not so with the Frontier. I almost bought one for that reason; but it's a little too outdated; even though it's a budget sale.
robin truck wrote on September 13, 2016 - 7:39am Permalink
nissan is great pickup nissan is a american truck because is founded by William Gorham and Meitaro Takeuchi. toyota is not american truck....
Steve wrote on September 29, 2016 - 1:30pm Permalink
The Frontiers/Xterras (Xterras no longer made) are GREAT vehicles. Super tough, reliable, built like a brick you now what house, easy to use, good value. Only drawback is so-so fuel economy, but the V-6 4.0 kicks butt! I have a '15 Xterra Pro-4X and love the rocking stereo, nav, reverse camera, leather seats, shift on the fly 4WD, bluetooth works flawlessly. What more do you need?
Hassan M wrote on November 23, 2016 - 3:44am Permalink
I love the Frontiers because I love Nissan engines. I have a 2003 4x4 V6 Crew Cab that is lifted and though it suffers from poor gas mileage after 175k miles she is super tough, reliable, and very cost effective because she requires very little maintenance. She has been my daily for 7 years so in 2017 I'm adding a Focus RS as I am more of a car guy and I do not want to add more miles to my truck. But if they make a new Frontier as a PRO-4X with a manual tranny you bet your butt I'll have 2 car payments.
Minkbear wrote on February 4, 2017 - 3:34pm Permalink
I love my 2014 Nissan Frontier. I've driven it all over the place (I have the Pro4X) - on and off road. Sure...the truck is a tad primitive on "styling" - but it is mechanically bullet proof. 41K miles and never been to the Dealer for repairs. Something to be said for inserting the key; turning it on; and having it work perfectly each and every time. Plus it is actually FUN to drive - good performance, cornering, etc. Other than styling, I cant see how a redesign would improve anything about it. Maybe more LED secondary and HID headlights?? That's about it.
Allen Jones wrote on June 6, 2018 - 9:51pm Permalink
I just bought a 2017 Nissan Frontier 4dr., 4.0l, 4wd, from Enterprise Car Rental with 14k miles.Why? Dependable and cheap! Can haul a boat! Can get dirty without guilt! My 1986 Nissan extended cab with overload springs hauled 3/4 tons of hay for well over 200k miles of service. The only reason to buy any other is comfort, it's a friggin right sized truck at a value price.