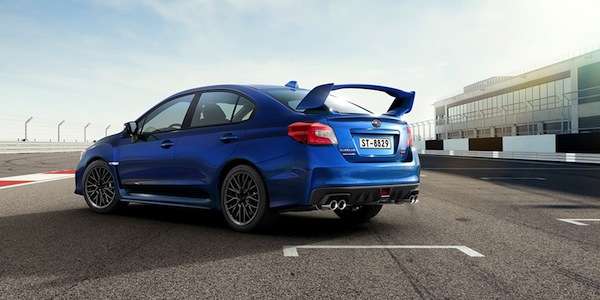 The all-new 2015 Subaru WRX STI has arrived in Europe at the Geneva International Motor Show 2014. The new 2015 STI is going to be arriving in European dealerships with the same power and engine as the U.S. spec model. We had though that Subaru might bring the STI to Europe with the new 2.0-liter powerplant that WRX gets, but the new STI will feature the same 2.5-liter boxer engine for European models. And it will be formidable in the dirt.

The all-new 2015 WRX STI brings a new chassis to European performance enthusiasts. It comes with stiffer stabilizers, supports and a frame that is 40% more rigid than the previous generation STI. Of course it features the excellent Subaru traction that Symmetrical All-Wheel Drive provides. This is what sets it apart from its European competition.

Handling has been improved on the new STI with a sharpened suspension featuring an increased spring rate that allows the 2.5-liter boxer to better utilize its power. It’s rally-bred low center of gravity gives STI stable flat cornering at high-speeds, especially on wet or loose surfaces. Combined with Symmetrical All-Wheel Drive, it should give any European sports cars a run for its money in the dirt.

It comes with the same 2.5-liter turbocharged Subaru boxer engine that puts out 221 kW of power and 407 Nm of torque. This is the same engine that came in the previous generation STI, but when combined with the new chassis upgrades, it better utilizes the power for better performance.

Europeans will get to experience the STI’s new Driver’s Control Centre Differential which allows customized power distribution between the front and rear wheels. It also features a new Active Torque Vectoring which routes power to select wheels for sharper, more predicable turning.

On the inside, the 2015 WRX STI gets a new D-shaped steering wheel, sport-design seats with Alcantara (grades Sport/Sport S) inserts and a 6-speed standard gearbox. The new six-speed has been optimized for quicker more dynamic shifting.

How will the all-new 2015 Subaru WRX STI compare to Europe’s finest sports cars? The all-new STI will do what it does best, it will take on any challenger in the dirt and win.

Other 2015 WRX STI stories of interest.