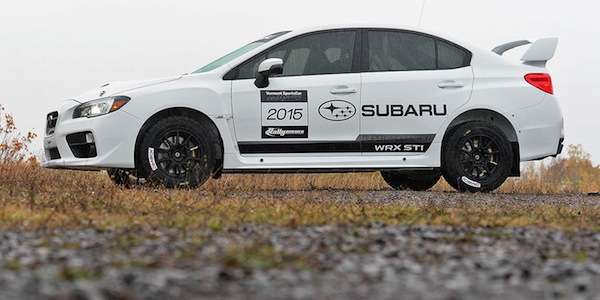 Subaru of America employees get some extremely fun perks for working at company headquarters. Do you have this much fun at work?
Advertisement

Working for Subaru of America (SOA) company headquarters in Cherry Hill, New Jersey has some fun perks for employees. Last week employees of the Japanese automaker were treated to what the company calls “Motorsports Day” at Subaru of America, Inc. Employees got to see the new 2015 Subaru WRX STI Super Production Rally Car along with all of Subaru’s motorsports cars.

Along with the new 2015 Subaru WRX STI Super Production Rally Car that Subaru will be racing next season, Vermont SportsCar, who manages all of the motorsports activities for SOA, was on hand to show off their performance race cars. SRT USA drivers David Higgins and Craig Drew were hand to show off their Championship trophy.

SRT USA teams were on hand

All four teams were on hand with their cars along with the 2015 Subaru WRX STI Super Production Rally Car and the DirtFish GRC show car that travels with the Subaru Interactive Display Unit were also part of the show. The Subaru WRX STI Rally Cars driven by David Higgins (#75) and Travis Pastrana (#199) and Subaru Red Bull Global Rallycross cars piloted by Sverre Isachsen (#11) and Bucky Lasek (#81) were also lined up for employees to get a close look. Employees were able to sit in the race cars and do their best driver and co-driver impressions.

Employees could also explore “The Attic” at company headquarters where Subaru of America stores unique, historic and experimental Subaru vehicles. Various engine and driveline parts were on display for employees to see what goes into the 600hp SRT USA engines. Subaru SRT USA technicians were also on hand to explain details of the race cars. Employees could also explore the mobile Subaru interactive display unit that travels with the teams to the various race events throughout the year.

SOA treats their employees to a fun day

Subaru of America sounds like a great place to work as the company treated their employees and staff to Motorsports Day at company headquarters. They got to meet their favorite drivers and learn about the race programs that gives Subaru its reputation as a world leader in motorsports.

Now fans get to look forward to seeing the new 2015 Subaru WRX STI Super Production Rally Car as it gets ready to makes its race debut for SRT USA next season.