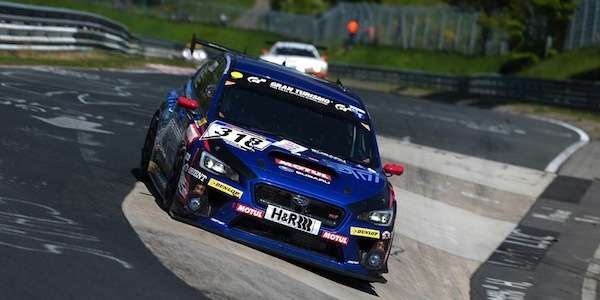 2015 Subaru WRX STI will participate in the Nurburgring 24-hour race to be held in Germany from June 19-22.
Advertisement

The 2015 Subaru WRX STI NBR Nurburgring race car comes with one big difference when compared with the production performance car. The new race car is based on the all-new 2015 WRX STI, and Fuji Heavy Industries (FHI), maker of Subaru, and Subaru Tecnica International (STI), have worked together to produce a car they hope will win a third victory in the SP3T class. This is the 7th consecutive year that Subaru has participated in the race with the WRX STI.

What is the major difference between production and race car?

It’s called the "Subaru WRX STI NBR Challenge 2014." Subaru and STI have collaborated to created the new race car based on the 2015 WRX STI production car. While the WRX STI NBR car employs special parts and is also tuned for the grueling endurance race, it uses the same core parts as the ones employed for the mass-produced WRX STI. But the production STI is powered by a 2.5-liter turbo boxer engine, and the STI NBR race car uses the new Subaru 2.0-liter powerplant.

Subaru competes in the SP3T class, for turbocharged engines displacing 1.75 to 2.0 liters, and will run in a competitive class with racing versions of cars from Audi, Volkswagen and Seat. The new 2.0-liter engine powers the new-generation 2015 Subaru WRX and many believe its a better engine than the production 2.5-liter the new 2015 STI comes with.

The new 2015 WRX 2.0-liter engine uses a combination of direct injection, high compression (10.6:1), Subaru Dual Active Valve Control System (D-AVCS), a twin-scroll turbocharger and an intercooler to get improved performance over the similar Forester XT version. The WRX STI NBR version will use different cams and higher-rate valve springs and other enhancements to enhance the performance envelope. And it gets a big bump in hp.

FHI and STI enhance their cooperation

Subaru and STI have a very good working relationship, but they have further enhanced their cooperation with the development of the STI NBR car that’s based on the all-new WRX STI. Subaru’s performance partner STI, uses their race technology that eventually filters down to the production models. Subaru also wants to demonstrate that the Subaru AWD sports performance of the all-new WRX STI is fully provided even on the Nurburgring circuit known as "ultimate public road."

The Subaru WRX was first produced in 1992 and has been involved in motorsport around the globe since the beginning. The performance car has evolved into a production car with overwhelming sports performance but still has the practicality of a daily driver. We’ll see the all-new 2015 Subaru WRX STI NBR race car take on the grueling Nurburgring 24-hour race in Germany June 19-22.

Watch NBR Challenge 2014 Tatsumi general director interview video. Even though it’s in Japanese, get a good look at the 2015 STI NBR race car.