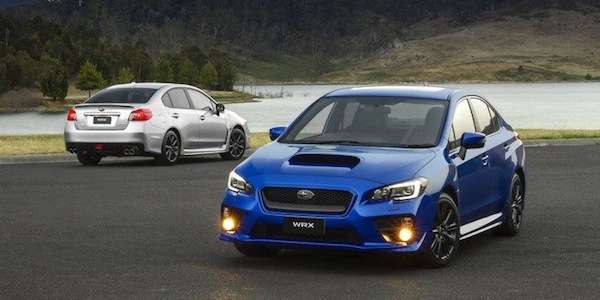 The all-new 2015 Subaru WRX is getting ready to make its launch in  Australia, and Rex is celebrating its 20th anniversary.
Advertisement

The Subaru WRX first arrived in Australia in 1994 and the new performance car from Subaru arrived with little fanfare. Twenty years later, the all-new-generation 2015 Subaru WRX arrives as a very popular model down under and has a cult-like following. After its arrival in 1994, The Subaru WRX, which has become affectionately known as the “Rex”, quickly established a following, particularly from automotive publications who appreciated its performance and value.

The WRX that started as a quirky niche performance car that was based on the modest-selling Impreza, has evolved into a popular car among performance enthusiasts in Australia. The Rex has come a long way since its early beginnings. Today, there are a number of clubs across Australia devoted to the WRX.

By 1999, the Subaru WRX was more popular than ever, and the affordable – turbocharged performance car set a record with 3776 WRXs being sold that year. Subaru estimates it will sell 150 new-generation WRX’s per month in Australia this year. Subaru says it is unlikely to eclipse those sales levels anytime soon.

Australia is the third biggest market worldwide for WRX and Subaru established it as a true performance car after competing in World Rally racing. It has a massive appeal in the Australian market in the “pocket-rocket category” that Subaru established in the 90s. Next month, Subaru gets ready to launch the fourth-generation 2015 Subaru WRX.

And WRX has evolved with its rally-bred genealogy that makes the new model the best-ever, with more power, it’s more fuel-efficient, more refined, better equipped, roomier, safer and better handling than the outgoing model.

Subaru Australia Managing Director, Nick Senior, said: “Twenty years ago this month, we introduced the WRX. “Since then it has become an iconic name in Australian motoring, synonymous with value for money and a vehicle that has unquestioned performance credentials, matched with reliability that competitors envy.

The 2015 WRX gets new technologies like the introduction of the Sport Lineartronic CVT. WRX buyers now have the choice of the six-speed manual or the sport CVT. Although WRX is no longer available as a hatchback, the sedan-only WRX’s sub-$39,000 starting price sees it undercut key performance small-car rivals like the Mitsubishi Lancer Ralliart and Golf GTI in Australia. The new Subaru is $700 more expensive than Ford’s Focus ST.

The all-new 2015 Subaru WRX which goes on sale in April is getting ready to make its launch in Australia, and Rex is celebrating its 20th anniversary in the country down under.