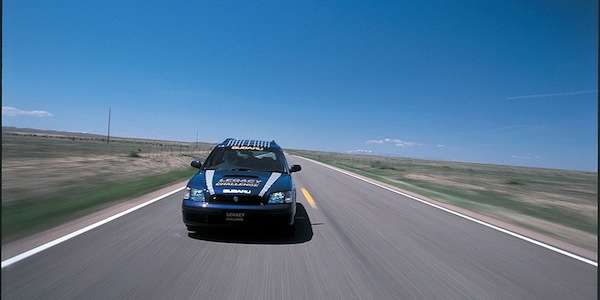 April 23, 1988 was a big day for Subaru and the Legacy GT wagon. What record did the GT Touring wagon set?
Advertisement

April 23 was a special anniversary for the Legacy Touring Wagon GT. On that day in 1998, the Legacy Touring GT Wagon recorded an average speed of 270.532 km/h on a highway in La Junta, Colorado, U.S., making it the world’s fastest production station wagon. The new 2015 Subaru Levorg sports tourer inherits this very same DNA.

The Levorg sports tourer that launched last year in Japan and Europe later this year, inherits the same DNA from the Legacy GT Touring wagon. Levorg launched with a new 1.6-liter Horizontally-Opposed direct injection turbo "DIT" Engine. This is a new powerplant for Subaru and the boxer engine will produce 125kW/250Nm. Subaru introduced this new engine first in the Levorg and will possibly use it in other models in the future as they look to increase fuel mileage in their lineup.

It’s a new sport tourer that embodies the new generation of Subaru, and features the most advanced safety technology on the planet. Levorg is a popular vehicle in Japan and should be a big hit in Europe where they...read more.

Subaru has a history of developing sporty models that are not only functional, but they’re also fun to drive. The new 2015 Subaru Levorg got its DNA from the Legacy GT wagon that set a number of records. The Levorg will only be sold in Japan, Europe and possibly in Australia. U.S. buyers can only look and not touch.

LG's New EV Battery Plant Is a Welcome News for Tesla
Tesla Giga Berlin's New Hurdle: It's Not Only the Gov't, but Now Tesla Itself
END_OF_DOCUMENT_TOKEN_TO_BE_REPLACED