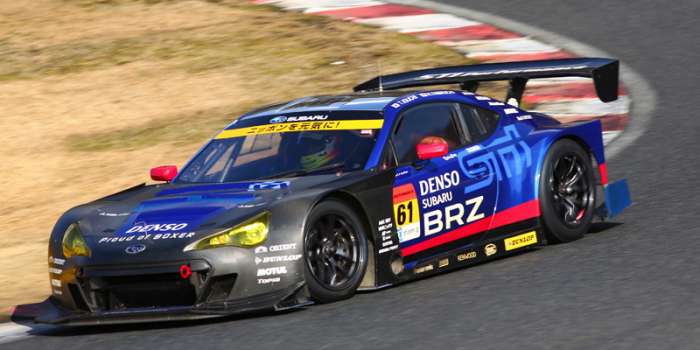 This past weekend, R & D Sport who manages the 2015 Subaru BRZ GT300 race car, took the car out for its first track test. What new changes does the BRZ get?
Advertisement

It may not sound like much, but one big change came in the switch from Michelin tires to Dunlop. Throughout the 2014 race season, the 2014 Subaru BRZ GT300 was fast, qualified in the pole position and won a race. All the drivers seemed to struggle with the Michelin tires the past two seasons getting the proper traction especially with the temperature changes. Tires play a critical role in the performance of the race car, and the team struggled to keep traction on the cool tracks.

There’s other changes that were made to the BRZ GT300 that include a front tire outer diameter that is now a compact 30mm, the shape of the front fender employs better aerodynamic characteristics and the hood has also been changed for improved aerodynamics in the front end of the BRZ. The steering stability has also been refined for 2015.

Another big change for the Subaru BRZ GT300 team will be the addition of a new driver, Hideki Yamauchi. He is a 26 year-old who stepped up to SUPER GT from F3. Yamauchi has been racing from the age of 10 and started in the cart series. He was influenced by his father who raced as a hobby. When Yamauchi graduated from high school, he started in earnest to become a professional race driver. This will be his first season in SUPER GT driving the Subaru BRZ GT300.

The 2015 Subaru BRZ GT300 race car had a successful two days of testing and both drivers got significant seat time behind the wheel. The first SUPER GT race will is coming soon on April 4-5 at the Okayama International Circuit. Stay tuned.

Toyota's First EV Will Have a Name of BZ: Toyota BZ
First Videos From Inside The Boring Company's Las Vegas Loop
END_OF_DOCUMENT_TOKEN_TO_BE_REPLACED