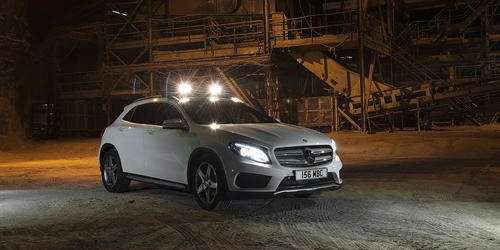 The all-new 2015 Mercedes GLA-Class is making its debut across Europe and makes its UK debut in a very unlikely place.
Advertisement

The 2015 Mercedes GLA-Class luxury compact SUV will go many places off-road with its 4MATIC all-wheel-drive, but it made its UK debut in a very unlikely place. Mercedes will outfit the new 2015 GLA-Class with its 4MATIC system providing reassurance and traction in all weather conditions. But Mercedes wanted to demonstrate the system in an extreme environment.

GLA has made its British debut at the very core of the UK, 189-meters (620 feet) below ground inside the vast Winsford Rock Salt Mine in Cheshire. This is the site which supplies much of the gritting salt for UK roads. Mercedes chose the unique site to take the 4MATIC equipped GLA as far off the beaten track as possible.

Mercedes-Benz and crew of the mine lowered four GLAs nose first, into the mine before being driven through the broken terrain of a network of more than 130 miles of tunnels running beneath Cheshire in what is very much a working mine. Mining operations since the 19th Century have left a void space of 23 million cubic meters below the surface.

Why did Mercedes-Benz chose this environment to make the GLA UK debut? Mercedes says they wanted to show the unique suspension setup of the new GLA which aims to strike a balance between on-and off-road demands and the traction afforded by 4MATIC. GLA was able to handle the challenging conditions within the mine and its all-wheel-drive coped with the broken terrain and salt road tunnels with ease.

Mercedes used its optional “Intelligent Light System” (ILS) fitted to the compact luxury SUVs and it lit up the eight-meter high tunnels (most of which are completely dark) spectacularly. The GLA was driven in the empty spaces left behind by the mining of salt–spaces now being filled by a thriving DeepStore document storage business.

Mercedes also uses a DSR (Downhill Speed Regulation) and an off-road transmission mode on the 4MATIC. DSR is activated by a control button in the center console, and assists the driver on steeper downhill stretches by maintaining a slow, manually selected vehicle speed within the physical limits when negotiating downhill gradients. This is done with the help of the engine and transmission control systems, and by specific braking intervention.

The all-new 2015 Mercedes-Benz GLA-Class is making its European debut and the UK debut 620 feet below ground at the Winsford Rock Salt Mine. Above ground, the GLA has gone on-sale in the UK with prices starting from 25,080 British Pounds OTR for the GLA 200 CDI.