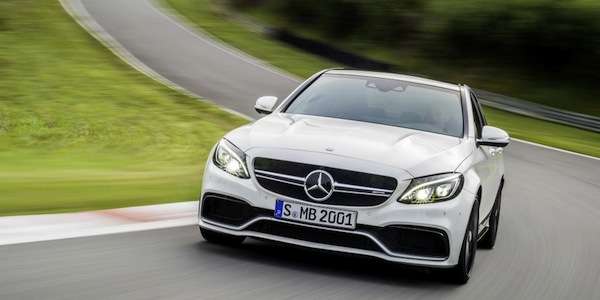 2015 Mercedes C-Class is ready to overtake BMW and Audi

The 2015 Mercedes-Benz C-Class is already taking the lead in sales and positions the brand to take the lead in luxury car sales.
Advertisement

Mercedes has a goal to overtake Audi and BMW to be the number one luxury brand in the world by the end of the decade. The new 2015 C-Class has just been launched here in the U.S. and the luxury sedan is already leading the brand in sales. Mercedes-Benz USA reported its highest sales month of the year with 28,593 vehicles sold and the new C-Class is helping in a big way.

MBUSA reports that October sales were led by the C-Class, which entered a new generation for the 2015 model year. The new luxury sedan took the lead with 7,412 units, an increase of 13.2% from the previous generation model which sold 6,548 vehicles in October 2013. Buyers like the new exterior styling, improved fuel economy and comfort features on the new C.

Last year it was CLA that was leading the way

Last year, October 2013 sales were fueled by the new CLA-Class four door coupe. This October, sales lagged behind October 2013 by 4.9%, the month’s volume propelled the company to the highest October year-to-date sales in its history with 261,804 units, an increase of 6.8% from the 245,125 vehicles sold through the first 10 months of 2013.

Mercedes is hoping the new 2015 C-Class will help them overtake BMW and Audi as the global leader for the top luxury brand. One of the big ways Mercedes C-Class gets improved over the outgoing model is in the area of weight savings and improved aerodynamics. The new C-Class cut fuel consumption by 20 percent. They did it with by cutting vehicle weight by 220 pounds, improved aerodynamics, two new turbocharged engines and a new efficient automatic transmission.

C-Class will have a global impact

As of last year, Mercedes supplied customers with over 10 million cars of the C-Class family around the globe. The first C-Class was launched in 1982 the brand has now sold more than 2.3 million sedans, estates and coupes of the previous generation alone since it was unveiled in 2007. The 2015 Mercedes C-Class offers buyers even more options and has something for everyone and is already a big hit with buyers.

October sales are showing that the new 2015 Mercedes-Benz C-Class will remain the best-selling model series for the brand. It’s a global luxury sedan and it’s already leading the way here in the U.S. In order for Mercedes to overtake BMW and Audi, the new 2015 C-Class will need to remain the top seller in the U.S., Germany and now the growing China market.