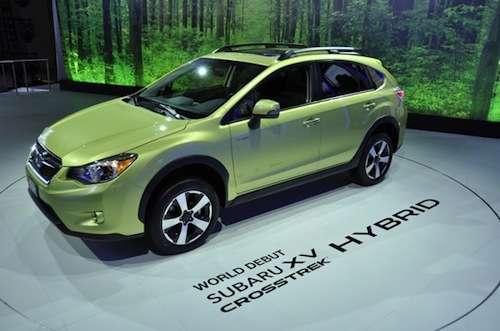 For the first time in their history, Subaru is bringing a new hybrid to market with the 2014 XV Crosstrek Hybrid variant, but is Subaru slow to react?
Advertisement

The new 2014 Subaru XV Crosstrek Hybrid has just made its global premiere at the New York International Auto Show. Subaru has been criticized by many for their lack of having a hybrid model in their lineup, while other automakers have had the technology for years. Is Subaru slow to react to the changing marketplace? Fuji Heavy Industries who is the parent company of Subaru is a leading industrial manufacturer and isn't slow to react, but are very methodical and they listen to their customers. It’s hard to argue with the way they operate when they bring products to market that customers appreciate and want and have had the kind of global sales success they've had the last five years.

The all-new XV Crosstrek Hybrid is a good example of the type of vehicles Subaru is bring to their customers, and also to a new generation of buyers who have never purchased a Subaru product before. Subaru doesn’t launch new vehicles until they have been perfected and they know that they will be a success. When Subaru launched the 2013 XV Crosstrek, they knew from customer surveys what buyers wanted. The new 2014 XV Crosstrek Hybrid won’t just be another hybrid model, but it will be the most fuel-efficient and lowest-emissions AWD hybrid crossover on the planet. That is how Subaru attacks the marketplace and continues to grow. And this is not the only hybrid model Subaru will be rolling out. The Japanese automaker is making vehicle electrification a key theme for the future.

When Subaru chose the XV Crosstrek as their first-ever hybrid model, they chose wisely. The XV Crosstrek is appealing to a younger generation of buyers who is more likely to be looking for this technology. The XV Crosstrek offers a more aggressive all-wheel-drive architecture and the added benefits of a hybrid powertrain, including higher fuel efficiency, broaden the vehicle’s appeal to a new generation. The 8.7 inches of ground clearance is higher than some larger SUVs and fits into buyers active lifestyles.

XV Crosstrek Hybrid has been re-engineered

Subaru has re-engineered the chassis of the XV Crosstrek Hybrid to handle the added weight of the battery system, improving handling, steering and ride. In addition to chassis changes, the new hybrid crossover gets added sound insulation, a start/stop feature, revised HVAC, new gauge cluster, and keyless start. It also includes other changes that the gas variant doesn’t have like aerodynamic aluminum wheels, a new active grille shutter system, an A/C sensor to optimize operation and a retuned suspension and steering for sharper handling.

The Subaru XV Crosstrek Hybrid combines the already efficient 2.0-liter Subaru Boxer engine with a 13.4-hp electric motor that’s integrated into the Lineartronic Continuously Variable Transmission (CVT). A 100v, 13.5kw nickel-metal hydride battery is located under a revised rear floor area, and the engine uses and integrated starter/generator for the automatic start/stop feature. The compact hybrid system weighs just 209 lbs. and places the electric motor just behind the transmission and in front of continuously variable transfer clutch. With the addition of all the new features, the new hybrid weighs approximately 300 lbs. more than the gas variant XV Crosstrek.

The Subaru-engineered hybrid system uses the electric motor for initial vehicle acceleration and then starts the gasoline engine once underway. The electric motor can also provide motor assist for acceleration in parallel with the gasoline engine, and an EV mode will operate the vehicle in certain low-speed situations. Brake regeneration works when the car is coasting or the driver has applied the brake, recapturing kinetic energy from the turning wheels to recharge the battery.

Additional exterior enhancements differentiate the Subaru XV Crosstrek Hybrid from the gas model. “HYBRID” badges appear at the front edges of the front doors and on the tailgate, and a new Plasma Green Pearl exterior color, is offered exclusively to spotlight the vehicle’s environmental character.

Inside, the Subaru XV Crosstrek Hybrid features a blue theme with silver trim to highlight the advanced hybrid engineering. The instrument cluster, exclusive to this model, uses gradations of the blue color scheme to provide a sense of depth.

The Color Multi-Function Display shows the hybrid system’s energy flow according to driving conditions. Using switching screens, the display was designed to combine driving operation information with entertainment content, and its screen can be easily viewed from any seat.

Subaru may not be the first automaker to come out with a hybrid model, but when the all-new hybrid crossover rolls out later this year, it will be the most fuel-efficient and lowest-emissions AWD hybrid crossover in America. And we can look for Subaru to introduce more hybrid and electric vehicles in the future. Look for the 2014 XV Crosstrek Hybrid model to arrive in showrooms in the fourth quarter of 2013.