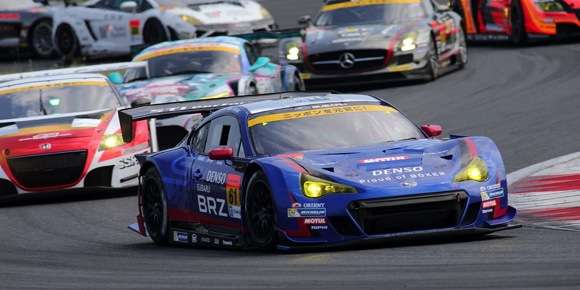 The 2014 Subaru BRZ GT300 finished in 12 place at the second race of the SUPER GT Series at Fuji Speedway. Is BRZ underpowered?
Advertisement

On Sunday, the 2014 Subaru BRZ GT300 race car finished with a disappointing performance after qualifying second overall. The Fuji 500 km SUPER GT race was the second of the series and a second race in a row that the BRZ GT300 has had a poor finish. BRZ GT300 finished in 12 place at the SUPER GT Series at Fuji Speedway this past weekend.

What happened to the new 2014 BRZ race car? STI general director Tatsumi Eiji thinks it’s the larger displacement engines in the Nissan GT-R, Honda CR-Z GT, BMW Z4, Mercedes-Benz and Lamborghini GT3 in the early stages of the race that put the BRZ GT300 behind quickly.

Kota Sasaki, who opened the race in the GT300 said the BRZ is just not powerful enough to compete with the likes of the more potent GT-R, BMW, Mercedes-Benz and Lamborghini race cars. He said the car gradually dropped in the order from second place start during the opening laps. There was also a crash early in the race that occurred in the first corner on lap three.

Sasaki tried to recover and catch up with the leaders, but found himself too far behind to get to the front. When Iguchi Takuto took over the driving to relieve Sasaki, he experienced trouble shifting as something happened in the gearbox. He pulled into the pits and the problem was solved, but valuable time was lost and he never recovered.

The 2014 Subaru BRZ GT300 still seems to be having problems with the tires. Tatsumi thinks that the slower laps when the cars were under the caution flag cools down the tires and it takes too long after the race restarts to get them warm and sticky again.

Even though the 2014 BRZ GT300 had a very fast qualifying and finished in second place to start the SUPER GT race, the team goes home with a disappointing 12th place finish. Next up, the BRZ race team heads to Autopolis on May 31 - June 1 for round three of the SUPER GT race series.