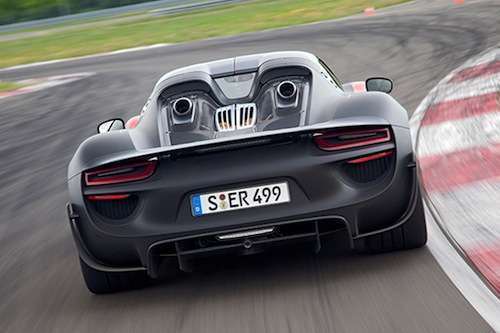 2014 Porsche 918 Spyder: The future of supercars is here now

The 2014 Porsche 918 Spyder is the future of sports car performance for the next decade and it’s here now. What records will Porsche attempt with the hybrid drive supercar?
Advertisement

Porsche has developed the supercar of the future and the future has arrived now with the all-new 2014 Porsche 918 Spyder. This hybrid drive sports car will give Porsche the launching point from which they will build their sports cars of the future. The 918 Spyder design was developed by the German sports car maker around the new hybrid drive system that gives the supercar a high degree of performance and also a degree of efficiency never seen before. What records will Porsche attempt with the new 2014 918 Spyder?

When we think of hybrid drive we normally think of higher fuel efficiency and also a degree of power output to go with it. We see this in most of the new hybrid systems coming out today. But Porsche has taken the fuel-efficient system to a whole new level. Porsche has already tested the supercar at the Nurburgring-Nordschleife last year and blew away some ambitious goals Porsche set for the futuristic supercar.

Just how fast is the new 918 Spyder hybrid?

Porsche had a developmental goal of running a lap time of less than 7:22 at the Nurburgring-Nordschleife.The super sports car blew that away and officially ran a 7 minute, 14 second lap time at the Nurburgring-Nordschleife. The supercar did it outfitted with an optional Weissach Package and street legal tires. Porsche said, “any questions left”? This makes the new 918 Spyder approximately 20 seconds quicker than the Porsche Carrera GT.

And Porsche isn’t finished with trying to set more records with the new hybrid sports car. They tell us more test drives on the Nürburgring North Loop will follow. The 918 Spyder surpasses anything Porsche has built in the past when it comes to fuel efficiency and also blows away the competition. Porsche has been able to take a plug-in hybrid vehicle with low fuel consumption and combine it with incredible performance. Porsche says, “maximum driving fun with minimal fuel consumption.”

Why is Porsche concerned with fuel-efficiency?

Porsche is looking at the future as automakers are forced to meet new fuel and emissions requirements around the globe. If they want to continue on their global growth plan, they will have to adapt to the changing world environment with stricter fuel and emissions requirements. They have combined the best hybrid technology with proven state-of-the-art race technologies that have come straight from motor racing to achieve incredible performance. It also features a carbon fiber body to lower body weight.

It starts with a mid-mounted 4.6-liter V8 powerplant that produces 608 horsepower and can rev up to 9,150 rpm. The V8 is combined with two electric motors and a seven-speed PDK dual-clutch gearbox. The combined output produces a whopping 887 horsepower. The 918 Spyder is capable of producing a neck-snapping torque output of 940 lb ft at 2000 rpm using the V8 and electric motors.

Porsche says the electric energy for the electric motors is stored by a liquid-cooled lithium-ion battery comprising 312 individual cells with an energy content of about seven kilowatt hours. The battery of the 918 Spyder has a performance-oriented design in terms of both power charging and output, so that it can fulfill the performance requirements of the electric motor. It is liquid-cooled by a dedicated cooling circuit and has a global warranty period for the traction battery for seven years.

The future is here now

Performance enthusiasts don’t have to worry that the future is going to be slow and boring. The new 918 Spyder hybrid will launch from 0-62 mph in a lightning quick 2.8 seconds and in electric mode will sprint from 0-62 seconds in 7.0 seconds. And it will reach 124 mph in just 7.9 seconds. The top speed of the new supercar will be 211 mph and 93 mph in pure electric mode.

The future of high-performance sports cars is here now and it’s an exciting future indeed. The all-new 2014 Porsche 918 Spyder will be the gene pool from which Porsche launches a new generation of global performance sports cars. This supercar will have a price of $845,000. The 2014 Porsche 918 Spyder is expected to enter production in September 2013 and will be in U.S. showrooms soon after in early 2014. Stay tuned for what other records Porsche will try at the Nurburgring-Nordschleife.