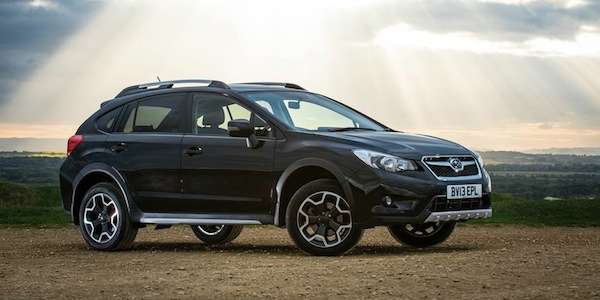 There’s good news for 2014 Subaru Forester and XV Crosstrek 2.0-liter diesel fans in the UK. They are in the top 10 in the Green Car Guide for 4x4's.
Advertisement

Subaru is the only automaker in the UK to get two cars in the Green Car Guide top 10. Both the 2014 Subaru Forester 2.0D and XV 2.0-liter diesel models are green, get very good fuel-mileage and both are very competent off-road vehicles. The Japanese automaker makes the diesel variants in Japan, Europe and Australia and they are very green and competent. So why don’t we see these fuel-sipping diesels in the U.S.?

The 2014 Subaru Forester and XV Crosstrek, both on the Green Car Guide top 10 list, get excellent fuel mileage. Forester gets 49.6 mpg and XV 50.4 mpg on the European cycle. Both come with a 2.0-liter Boxer diesel engine that comes with 148 hp with 258 lb. ft of torque. The are smooth, powerful and have plenty of low-end torque to get the all-wheel-drive multi-use vehicles through any driving situation on-road or off-road. XV came in at number 4 on the list, Forester was number 10.

Heres’ what Green Car Guide for 4x4's had to say about the Subaru XV diesel. “Subaru has a strong track record in the area of 4x4s, with a number of World Rally Championships under its belt thanks to the Impreza. The latest Subaru XV is very competent in the rough stuff, and it can also manage 50.4mpg.” About the Forester, here was their comment. “Yes it’s another Subaru. The Forester has grown and offers more space than the XV, it’s capable off-road, and can achieve good real-world economy.”

Part of the reason Subaru doesn’t offer a diesel in the U.S. is because of economics. Historically, there’s always been a higher demand for gasoline here. The federal government taxes every gallon of fuel sold, and our tax system is biased toward gasoline, making it cheaper to buy than diesel. It’s the exact opposite in Europe and in other global markets like Australia. Diesel is cheaper to buy than “petrol”. In the U.S., gasoline is much cheaper than other parts of the world and is the popular choice. It’s hard to convince consumers to pay an extra $5-7,000 for a diesel vehicle, and then ask them to pay more at the pump for diesel fuel.

The third factor why the U.S. gets left out of getting the Subaru Forester and XV Crosstrek diesel variants, is that it’s expensive for a manufacturer to get their diesel engine certified here in the U.S., which again adds to the cost of that diesel car. To meet U.S. regulations, automakers are required to use expensive after-treatment systems that in some cases inject an aqueous urea solution to handle the NOx. The added expense of course means an even longer payback period for the consumer.

How soon will we see a Subaru Forester and XV Crosstrek diesel in the U.S.? Don't hold your breath. Subaru will not likely spend the money for certification when many U.S. buyers aren’t willing to pay extra for that Subaru Forester or XV diesel. 2014 Forester and XV Crosstrek 2.0D diesels were both voted Green Car Guide for 4x4's top ten list because they are powerful and efficient engines. We in the U.S. will have to stick with our gas models.