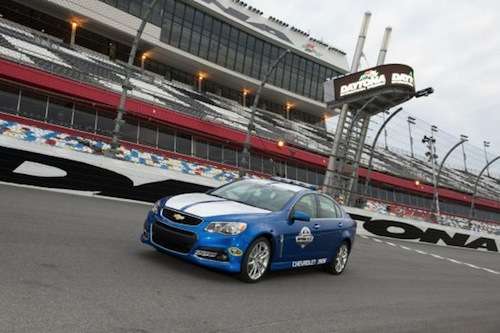 The new 2014 Chevrolet SS high-performance sedan has been busy setting the pace during its Speedweeks debut, but is this enough to launch the SS to success?
Advertisement

The all-new 2014 Chevrolet SS has been extremely busy as it has made its debut during Speedweek. Yesterday, Mark Reuss, General Motors North America president, who was instrumental in bringing the new Chevrolet SS to NASCAR, drove the new 2014 SS performance sedan as the pace car for the 55th running of the Daytona 500. Earlier, the new 415 horsepower V8 SS sport sedan was the pace car for the Sprint Unlimited and both Budweiser Duels. GM is bringing out the new SS later this year and the high-performance sport sedan marks a new era for Chevrolet as this is their first rear-drive performance sedan since 1996.

GM using NASCAR to gain attention for the new SS

This weekend at the Daytona 500 in Daytona Beach Florida, Reuss was behind the wheel of a 2014 production Chevrolet SS. The new performance sedan didn’t have any trouble setting the pace for the big race as it’s powered by the LS3 Chevrolet V-8. It delivers 415 horsepower and 415 lb-ft of torque, and GM says it will launch from 0 to 60 mph in about five seconds. The Chevrolet SS is one quick sedan and GM is hoping it will be successful in the performance sedan segment. It may be able to compete with the Chrysler 300 and Dodge Charger, but what about the rest of the performance car segment?

GM chose the Daytona 500 wisely to get as much exposure for the new performance sedan as possible. The new SS will also be Chevrolet’s racing car entry in the 2013 NASCAR Sprint Cup series. This is the first time Reuss has been an honorary pace car driver for a NASCAR race and he was excited to say the least.

“Leading the Daytona 500 starting field to green driving a 2014 Chevrolet SS pace car on one of the most famous race tracks in the world will be a special honor for me,” Reuss said. “I can’t wait to drive across the start/finish line and on into Turn 1. I know it will be difficult to turn down onto pit road when it’s over because I will want to make that moment last as long as possible.”

Is the new SS already behind the curve?

The new Chevrolet SS is coming out at a time when automakers are shifting to smaller turbocharged engines in their performance cars. Carroll Shelby was quoted as saying, “I think you're going to see the industry going completely to small engines with turbochargers. That's the only way you can get the mileage that the government is going to be demanding.” What we will be seeing more of in the future, is performance vehicles with smaller turbocharged engines that will meet the new emissions and fuel mileage standards. We saw Shelby American unveil their first-ever Shelby Focus ST with a smaller EcoBoost engine. Shelby says the new Focus ST will deliver performance yet still get up to 40 mpg.

GM is already behind the curve in bringing out the new SS with a big V8. Ford is even launching the all-new global 2015 Ford Mustang with a smaller turbocharged four-cylinder. The new SS may appeal to the older Boomer generation, but won’t be a major player with a new generation of buyers in the high-performance market.

GM is hoping to fill a void

Reuss and GM are hoping it will be different enough to capture the performance buying publics attention. He said, “The all-new Chevrolet SS fills that void and fills it better than any other vehicle in the brand’s rich history. The comfort, convenience, spaciousness and V-8 power make the SS a total performance package unlike any other on the road today.”

While it may be different, it will have a hard time competing with the new global performance cars that feature performance and fuel efficiency. Maybe GM just wanted a new car for NASCAR to promote the brand and is not concerned with sales of the new SS as long as it drives people into Chevrolet showrooms. The 2014 Chevrolet SS will be available in the fourth quarter of 2013, with prices set closer to the on-sale date.

Anonymous wrote on February 25, 2013 - 12:16pm Permalink
can you say : taxpayer funded [GAS GUZZLERS]
Marvin McConoughey wrote on February 26, 2013 - 3:57pm Permalink
The Chevrolet SS looks like a shrewd move for GM. The development cost is very little because it is essentially an Australian made sedan using mass produced Chevy parts, including a fully-amortized six-speed transmission. Fuel economy should be fair-to-good for its class because it will have the latest small-block fuel-saving technology, which still uses regular grade. Another reason to hope for success is that there are many more Chevy dealers to service the car than is true for many of its performance competitors. Taking a performance car forty miles or more to find a qualified service center gets old quickly. I will be considering the car for my next purchase.