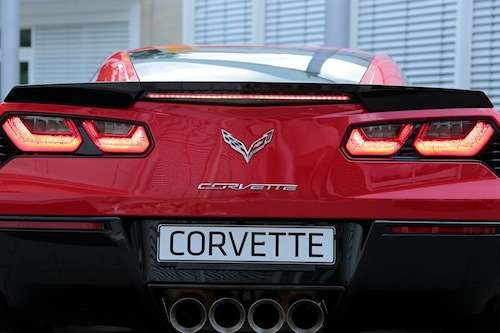 The first 2014 Chevrolet Corvette Stingray C7 has arrived in Europe for testing and has been developed to be a global sports car. Can it compete with Europe’s supercars?
Advertisement

Europeans love their performance sports cars and the all-new 2014 Chevrolet Corvette Stingray C7 has arrived on Europe’s shores to see how it will stand up against the world’s finest supercars. Patrick Herrmann, technical manager communications at Chevrolet Europe and Cadillac Europe has one of the best jobs in the world. He will get to spend the next couple of months with the new Chevrolet Corvette C7 Stingray and test drive the new American sports car on Europe’s roads.

Herrmann will be the first European Chevrolet employee to thoroughly test the new Stingray in Europe. The new sports car from GM was designed from the beginning to be a global supercar and it will be sold in Europe and will arrive in European dealerships in late 2013. Chevrolet Europe says that “testing procedures are part of the GM standard quality control program which is conducted for each new Chevrolet model before it goes on sale in Europe.” But Chevrolet has global aspirations for the new seventh-generation Corvette.

Every observation will be documented

As Patrick Herrmann drives the new C7 around Europe, he will document every experience and observation not only for the team back home, but also for Corvette fans around the globe. Chevrolet wants the experience to be seen by performance fans through the release of videos, as well as through social media like Facebook, Twitter and YouTube. Fans can keep up with his experience on Twitter using the hashtag #C7experience.

Part of Chevrolet’s strategy for the new global Corvette is to appeal to a new generation of buyers around the globe. The Boomer generation in the U.S. who have purchased most of the Corvette’s are aging, and GM needs to appeal to a younger buyer in the future. According to J.D. Power, the average age of Corvette buyers is now 54 years and sales of the 2012 model were down 48 percent since 2008. Chevrolet knew something had to change.

Chevrolet knew the downward trend couldn’t continue if the Corvette Stingray was going to be a viable global sports car. For the first time in its history, the newly designed Corvette had input from designers outside the U.S. The new-generation Stingray has been refined and gets new technology and performance but still retains the iconic Stingray designation. The new Corvette is the most powerful model ever produced by GM. But will it appeal to the Europeans and can it compete with Europe’s finest supercars?

Herrmann will attempt to find out as he takes the new red Corvette and tests it on European roads for the first time. He has raced on European National teams and he knows performance. He says, “ My favorite part of the job is what I get to do now.” He will take the first model before production starts and see how everything is working on the car, from the engine to the suspension on European roads. He will then send his ideas about making improvements back to the development team in the U.S.

The all-new global 2014 Chevrolet Corvette Stingray C7 has arrived in Europe and is ready to take on the challenge of Europe’s roads, and more importantly the Old Countries finest sports cars. Prices in the UK with the performance pack will start at 61,495 ($93,601 USD) British pounds. Will it be able to compete with Europe's sports cars and attract a new generation of global buyers?

LG's New EV Battery Plant Is a Welcome News for Tesla
Tesla Giga Berlin's New Hurdle: It's Not Only the Gov't, but Now Tesla Itself
END_OF_DOCUMENT_TOKEN_TO_BE_REPLACED