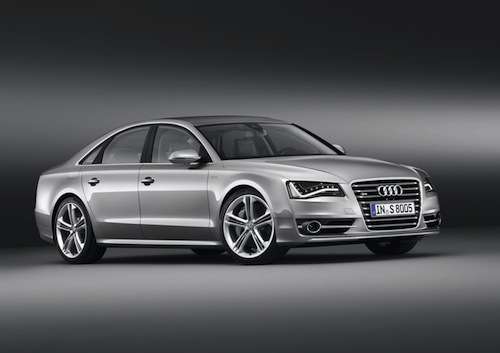 Audi has released a very well done commercial and the all-new 2013 Audi S8 plays the perfect role in “Suspect.”
Advertisement

Audi has taken the race-engineered S models and brings a whole new level of excitement to the ultimate performance vehicle. In their latest commercial for the high-performance 2013 S8, Audi has done a clever job of showing how the S model delivers an extra level of driving enjoyment. The film is called “Suspect” and Audi shows the ultra-performance S8 being used to pull off the ultimate heist.

In a large metropolitan city, an armored truck is being loaded with money as it sits outside the First Council Bank. As the security guards load the armor plated vehicle with cash, they spot the 2013 Audi S8 and its driver waiting. It appears the driver is waiting for the perfect time to make his move.

Even the cops on patrol in their squad car seem to suspect the S8 with its engine running and are on heightened alert. The Audi S8 is waiting to launch its 520 horsepower when the time is right. The film has all the right ingredients and characters to make the perfect heist happen.

The guard who is working on the inside is ready, and the beautiful girl is in place too as they all prepare to pull off the perfect armored car robbery. The girl enters the car and everything looks perfect until she speaks to the driver. The words seem to jolt the driver from a dream and brings him back to reality.

The 2013 Audi S8 is the most powerful sedan in Audi’s history and the driver launches the 4.0-liter twin turbo engine from where it's parked. The super S8 sedan allows the driver to take an ordinary moment and transform it into a heightened experience. Audi claims the all-new 2013 Audi S8 will “Heighten every Moment.”

The new Audi S8 will sprint from 0-62 mph in just 4.2 seconds and has a governed top speed of 155. The 2013 model delivers fifteen percent more power than the outgoing S8 V10. Audi says the new 2013 S8 is “a vehicle engineered for performance, but wild enough for any imagination.”

It’s hard to argue with that level of performance and driving pleasure. The 2013 Audi S8 could be the finest high-performance sedan on the planet. It will give any driver a heightened level of excitement.

But in this thriller, not everything is what it seems. Is it a armored car robbery or just a figment of one Audi S8 driver's imagination? Watch the entertaining video below to find out.