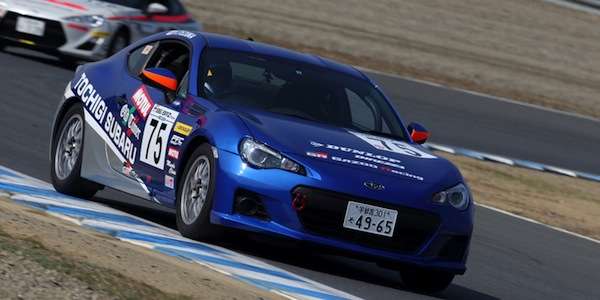 2014 Subaru BRZ is participating in the Japan Gazoo Racing series. Why is BRZ the perfect track car?
Advertisement

The 2014 Subaru BRZ is new on the scene in the racing world, but its the perfect sports car for the Japan Gazoo Racing series 2014. It’s very close to being the perfectly balanced car with the Subaru boxer engine that sits low and far back in the chassis. This makes BRZ a great performer in the tight corners on the race circuit. Why is Subaru involved in auto racing around the globe?

Subaru and the BRZ are perfectly mated for racing. Subaru has a long history of being involved in motorsports, and BRZ was the ideal sports car to be involved in the Japan Gazoo Racing series. Round 2 of the series is taking place this Sunday, April 27 at the Sports Land SUGO, Miyagi Prefecture in Japan. But Subaru will bring 10 BRZ/GT86 race cars to the track in the entry of 51 cars.

This race series has a long prestigious history of nearly 40 years in international motorsports, and it's a great venue to show off the BRZ and its sports car attributes. The Sports Land SUGO is the ideal place for the BRZ as the course layout features a technical and a height difference of about 73 meters. And the circuit is narrow and the race will see close “combat” as the 51 cars race around the tight track.

Subaru is bringing three more cars to this second leg of the series than they did in the season opener. The number of entires has exceeded the full grid number of the race. The race has become so popular with so many cars, that the race is divided into two races. But all the cars, including the 10 BRZs, will see action on the circuit between the two races on Sunday.

The Japan Gazoo Racing series race schedule includes 10 races this season between March and November 2014. The first race was held at the Twin Ring Motegi Tochigi), in wet conditions last month. The race saw a heated fierce battle in the tight corners and it requires drivers to be on the top of their game.

The same battle will be seen at Sports Land SUGO this weekend. Tezuka YuWataru of "Tochigi Subaru BRZ DL Motul" was the winner in his 2014 Subaru BRZ last month in the final race B in the opening round. This 10 car BRZ field shows why the 2014 Subaru BRZ is the perfect track star.