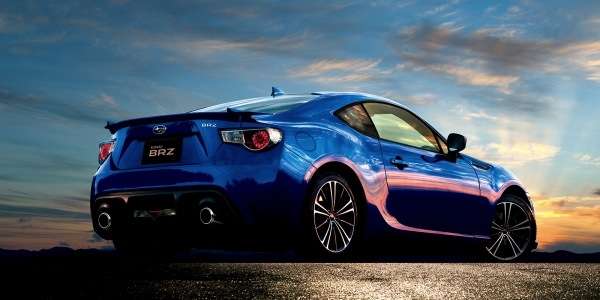 Subaru is introducing an improved 2015 Subaru BRZ RA Racing version in Japan for motorsports enthusiasts. Can a U.S. version be far behind?
Advertisement

Subaru and STI have been testing the BRZ two-door sports car recently, and will be launching a new 2015 RA Racing model with an improved suspension on the rear-drive coupe. Initially the new BRZ will be for the Japanese market. Subaru says they will release the new BRZ in four new trim levels for Subaru BRZ enthusiasts. But don’t look for any engine upgrades to the model just yet. The new 2015 BRZ RA Racing version will still be powered by the 2.0-liter naturally aspirated Subaru boxer. It will still come mated to 6-speed manual and 6-speed automatic gearboxes.

But the new 2015 Subaru BRZ Japan model will come in four new trim levels, BRZ RA, RA Racing, R and S models. What new upgrades will the new variants come with? Subaru says they have tuned the suspension on the new BRZ. We know STI has been testing the BRZ and adding suspension upgrades. Tommy Makinen was testing a BRZ model in Japan back in November and we reported it was likely the forerunner of a new STI variant.

This new 2015 Subaru BRZ RA Racing model will get new tuning to the damping force characteristics and friction characteristics of the front and rear suspension. Subaru says they have improved the ride on the new BRZ. Makinen who has been testing the new BRZ, said late last year that the new BRZ, “Is an easy car to drive anyway, but I could feel the difference in the steering that was solid and improved straight-line stability in the windy conditions like today. The handling of the car is definitely improved in the corners.”

The RA Racing model will be available for motorsports enthusiasts and it will be track-ready. Subaru has not released all the details on the new two-door coupe, but it will feature some other goodies in addition to the suspension tuning. Subaru will add a roof antenna that will adopt a shark fin for sharper styling like other sports cars.

The new BRZ RA Racing will also come in a more “vivid” WR Blue Pearl exterior paint color. It will also feature new body panels to set it apart from the base BRZ model. Other exterior treatments will include a new rear spoiler on the “S” model, a new keyless entry and push stop/start and an improved design on the instrument panel with a new carbon trim. Also a new Alcantara leather package will be available with navigation.

From Tommy Makinen’s testing of the BRZ we know the new BRZ RA Racing model will come with an enhanced rigidity of the body, improvements in the suspension and steering and increased thickness in the diameter of the drive shaft. Makinen commented on the changes, “I can see the direction that STI is going with BRZ and it’s clear their aim is clear. I think STI is building a complete car.”

BRZ motorsports fans will be getting a new BRZ RA Racing that will come with improved performance on the road and track. STI has been developing a new BRZ that will perform at high speeds on the race circuit. It looks like STI’s goal is to improve the suspension, steering and drivetrain and get it ready for an increase in engine performance. The new 2015 Subaru BRZ RA Racing will be released in Japan on June 27, 2014. Can a U.S. version be far behind? Stay tuned to Torque News for the latest 2015 Subaru BRZ news.