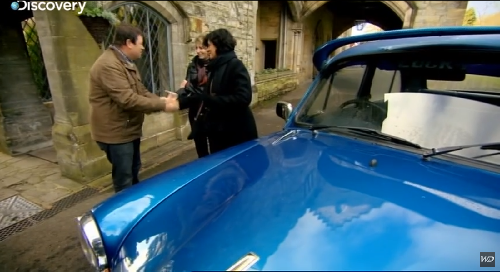 Auto enthusiasts will love Wheeler Dealers Trading Up, but one big thing is missing

Mike Brewer is on the move again in this season's Wheeler Dealers. However, there is no mention of Edd China.
Advertisement

A new season of Wheeler Dealers is back on Discovery’s Velocity Channel. The new season is titled “Trading Up” and the general premise is that Mike Brewer will travel the world trying to turn about $2000 into a supercar. Mike is as good as ever, and the show is well done. The storyline flows, but there is one very big (tall actually) part of the show missing. Where is Edd China?

The new show begins in India. Mike is now using local connections to help him in his searches, refurbishments and “sell-ons.” We won’t repeat the show for you here, but it is a good break from the routine. The last season had Wheeler Dealers on the road as well, but it was the dynamic duo, not just Mike alone. For the most part we don’t miss Edd, but when Mike takes it upon himself to affect repairs and upgrades on the cars he buys we do miss the Tall Man.

Although Mike can turn the spanners and succeeds in using some contact cement to re-upholster the seats in a clapped out car, the effort seems artificial. Worse, it is clearly rushed. Edd always would commit the time needed to prep the job, do the job right and tell us s little about what he was doing and why it was important. That aspect of the show is now diminished. In episode two Mike uses his old trick of refreshing on older Rover with a new fascia and some cleaned up wheels. The upside is that it emphasizes just how simple some repairs can be.

Thus far in the new season the highlight would have to be the purchase, export and import, and sell-on of a Hindustan Ambassador. If you have never seen one, the show is worth watching for that part alone. The couple that the car goes to are also interesting and it is always heartwarming to see a niche car go to a new owner who holds a special place in their heart for the odd-duck motor.

Video and still image courtesy of Youtube.com and WheelerDealersTV