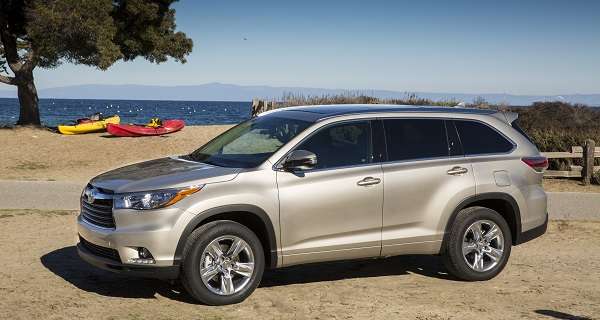 What will past Toyota Highlander owners think of the all-new 2014 model?

The owner of a 2007 Toyota Highlander completes a week-long test of this new Highlander and finds an interesting answer.
Advertisement

The 2014 Toyota Highlander is a completely new design with significant changes to all aspects of the vehicle. This is an important vehicle for Toyota and one of its top sellers. Torque News is testing two separate versions, the XLE, and also the top-of-the-line Limited. Coincidental to this testing, I own a 2007 Highlander Sport, which is the model-trim equal of the current XLE. I have driven it as my daily driver for about 7 years. I have also owned a current-generation Lexus RX 350. What I found driving the new 2014 Highlander is that it stays true to the original generation’s mission, but takes liberally from the Lexus to provide a lot more refinement.

Differences Between 1st Generation and New 3rd Generation Highlander
The original Highlander evolved over time, but by its last model year in 2007 most were V6 powered, 3-row, all-wheel-drive crossovers. The vehicle was a smashing success for Toyota. Families with 1, 2, or 3 kids loved the vehicle for its combination of “right-size,” power, smooth ride, durability, and family-friendly features. The 3rd row was always intended for use by children. That extra seating is perfect for dinners with grandma and grandpa. They get to sit in the middle row, which is extremely easy to get into and out of, and the kids hop in the way-back. It also makes the car a viable substitute for the maxi-van for families that car pool their kids to sports and school.

Size Differences
Overall, the new 2014 Highlander XLE fits the same description, but there are many, many upgrades. The vehicle is now significantly larger and it shares much with the Lexus RX 350 including its platform and overall construction. I could bang out the dimensional numbers, but let’s not. Let’s do it as if you were here with me. You can see that the vehicle is now much closer to being a Ford Escape sized vehicle. The extra width allows for a third space in the 3rd row, so theoretically, it is an eight passenger vehicle. It really is an 8-passenger if three or four of those passengers are on their way to youth soccer. In the Limited, the second row swaps the three passenger bench for two captains’ chairs making that a limo-like place to sit. The second row was always spacious in all Highlander models, but the new 2014 seems to have about a foot more legroom. The length and width really are useful, not done just for the sake of making a bigger vehicle.

Highlander Safest Family Vehicle
Up-front in the 2014 the feeling is of driving a large vehicle. My 2007 Highlander almost feels like a RAV4 by comparison, and in fact, the RAV4 is about as big inside now, except that it is only two rows. The new Highlander gives the driver a feeling of invincibility. That may be good, may be bad. Your call. It is a big, solid vehicle that you will feel confident in when your kids are in back, the ice is coating the roads and it is dark. Actually, since this can be a Top Safety Pick+, the highest possible safety rating for any vehicle in America, it may be one of the safest family cars you can buy. The Honda Pilot is not rated this high. To get the “+” you need to buy optional forward-collision prevention called PCS. Either way the vehicle is as safe as any comparably equipped competitor.

Highlander Fuel Economy
My 2007 Highlander gets about 18 MPG around town. I am not happy about that and I have shopped for a smaller, more fuel economical vehicle. However, I could not find one I liked more than my 2007 and I am now going to keep it forever. This new 2014 Highlander gets about 21 MPG around town based on my driving one full tank of gas in the suburbs. On the highway my '07 Highlander never exceeded 23 MPG and usually is only about 21 MPG. The 2014 Highlander XLE that I tested got 24.2 MPG on a 110 mile highway and secondary road loop. That is really good for a vehicle in this class. Keep in mind, that is regular unleaded fuel of course. Shop for a European luxury car and your fuel costs will be about 10% higher since they still use premium for some unknown reason. If you want the highest MPG vehicle in the country in this class, the Toyota Highlander Hybrid is exactly that, but be prepared for sticker shock if you look at one.

Highlander Drivetrain Differences
The 2007 Highlander had a 3.3 liter V6 and a 5-speed automatic transmission. It is fine when tooling around, and if you need to floor the gas it roars ahead. It is a quick and powerful car. However, its engine seems to have steps in the rev band due to its early variable valve timing and other reasons. The new 2014 Highlander uses the same drivetrain as the Lexus RX 350. That means a silky-smooth 3.5 liter V6 (it is a different engine, not a larger version of the old 2007). It also has a 6-speed automatic. In my opinion there is simply not a better drivetrain in the US market for a family vehicle this size. Who cares what I think? Look at the sales numbers and you will see the Lexus RX 350 dominates the luxury class sales for vehicles this size and this is its drivetrain. The outgoing, second generation Highlander, used the newer 3.5 liter V6, but did not have the same transmission as the Lexus.

Old vs. New Highlander Pricing and Value
The vehicle I bought in '07 was very close to the new 2014 Highlander XLE in terms of content. Both were meant to be the "value" Highlander. My buy price in early 2007 was $28K. If you shop the new 2014 XLE you will pay about $36K now. Draw your own conclusions about the value of the dollar and inflation, but the new vehicle has the following added content: Heated leather seats. Dramatically better infotainment including a navigation system. Many more optional safety systems (but not at that price).

Conclusion
The 2007 Highlander was one of the best family vehicles of its time. The 2014 Toyota Highlander XLE is now larger, safer, more fuel economical, more refined, and comes with all the content most people will want. The new Highlander should be a top consideration for any family looking for a vehicle in this class.