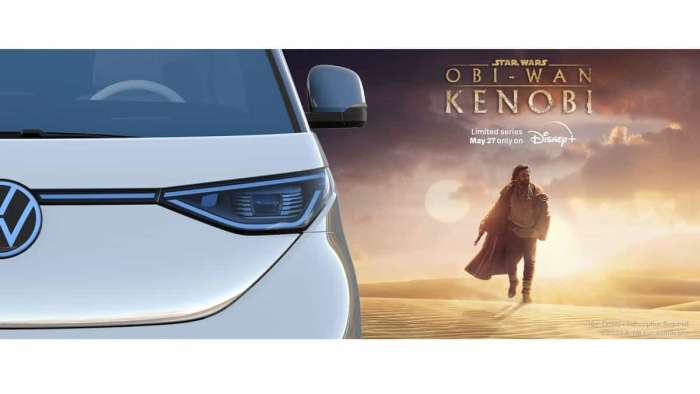 Automakers cannot get enough of Star Wars marketing tie-ins. Here’s what Obi-Wan and Volkswagen have in common.
Advertisement

The ID.Buzz is a minivan that Volkswagen is planning to begin sales of globally soon. Minivans are not that exciting by comparison to, say a convertible V-10 powered Audi R8 Spyder, so VW is looking for a way to highlight its latest people mover in some sort of exciting way. It chose to leverage a children’s Star Wars series premiering on the Disney Channel this month.

“The opportunity to explore how ‘Obi-Wan Kenobi’ and the Volkswagen brand could come together on a vehicle was pure fun. The themes of good and evil, light and dark aren’t necessarily concepts we apply to cars. The ID. Buzz collaboration offered a unique opportunity to have the cars become graphic reflections of two iconic characters,” says Doug Chiang, Lucasfilm VP and Executive Creative Director.

“In close collaboration with Lucasfilm, we combine the timeless and functional design of the ID. Buzz with the fascinatingly detailed world of Obi-Wan Kenobi,” explains Volkswagen Head of Design Jozef Kabaň. This philosophy also compelled the ID. Buzz lettering on the rear of the vehicles, which was designed in the classic Star Wars “Aurebesh” font – instead of in the font of standard Volkswagen models. Other lettering inspired by the series, is located on the fenders.

The new series is titled, “Obi-Wan Kenobi.” It picks up the Star Wars saga’s timeline when Luke and Leia are children. If you have seen the prior work, Luke is being raised on a moisture farm by an “uncle and aunt,” and Leia is being raised by family Organa, a politically-connected family on a lovely planet. We all know how the story for Luke and Leia ends now, having seen the timeline ahead of this period. However, the story of how Luke and Leia grew up has not been shown on film, video, or whatever the right word for a miniseries on a pay-per-view channel is. Now we can watch.

Your author has seen the first two episodes of Obi-Wan Kenobi on Disney. Don’t worry, you won’t get any spoilers in this story. However, you will get some opinions. Here they are:
-This “live-action” series was created for children, not adult fans of the Star Wars films.
-It is sloooow.
-The bad guys and gals are nowhere near as scary as Darth Maul and Darth Vader. At least not in the first two episodes.
-If you thought Padme’s running looked awkward in the movies in which she was a star, wait untill you see the running scenes with little Leia.
-Mandalorian started slow and finished in a way that everyone loved. We are hoping this series does as well.

So, Volkswagen has adopted this series to help bring attention to its new minivan. Which is a good match, since minivans are built for carrying children and it’s not scary. We cannot comment on whether it is slow and awkward because we haven’t driven the Buzz.

When Nissan co-marketed its Rogue with the Star Wars movie named in part “Rogue,” it made sense. However, wouldn’t it have made more sense for the VW Buzz to be marketed alongside Lightyear, the coming film about our favorite character from Toy Story named Buzz that will also be a children’s movie?

What say you? Is VW’s marketing plan moving you closer to adopting a Vw Buzz minivan?

Image of Obi-Wan and a minivan named Buzz courtesy of VW.