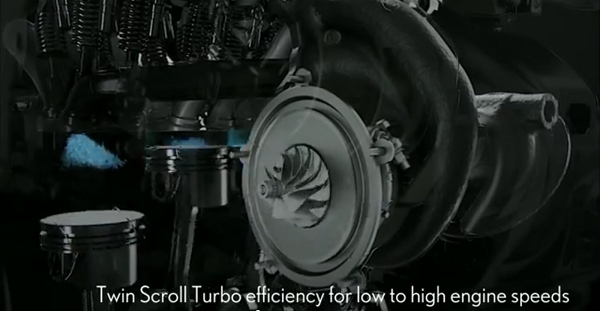 Lexus has released a new video highlighting the design and features of its all-new 2.0 liter turbocharged engine. This engine will first appear in the new NX 200t crossover coming this fall. Lexus has also promised that it will soon rescue the IS 250 and future owners from the sleep-inducing engine it now suffers from. The Lexus IS 200t may become Lexus’ third leading seller right out of the gate.

Lexus is clearly following BMW’s lead by moving in this direction. Yes, Volkswagen and Hyundai should receive due credit for introducing the turbocharged in-line four cylinder to the mass-market in the US, but it really was BMW that dove deep and refined the engine design to be acceptable (barely) in premium sedans and crossovers. This author is still very skeptical of any claim that a turbocharged four can match both the fuel economy and also power of a modern six cylinder engine. Regardless, the automotive world knows it can save a few pennies on each smaller motor it can convince buyers to take home and also gain a few tenths of a mile per gallon on the EPA estimated mileage cycle.

Taking a page from Daniel Tosh and doing our own 2.0 breakdown of this week’s video, we see that Lexus is implying that it will be making the turbocharger. It shows the impeller vanes being machined. If this is true, Lexus is going to be one of the few automakers that create this part themselves. Most buy their turbochargers from suppliers. Neither is better, it is just interesting to see Lexus going this way, if indeed it is.

The next thing the video confirms is that the new engine will have direct injection, which was assumed, but now is confirmed. In fact, the new name of the direct injection method is “fan-spray direct injection.” Lexus claims this optimizes combustion. The video also shows some of the aspects of the design we already knew about such as the cylinder head integrated exhaust manifold. Basically this means that the turbo housing is part of the manifold rather than being “plumbed.” The video did not mention it, but we also know that Lexus is planning to use a water-cooled intake manifold to cool the intake charge and make it more dense. There has been no mention of an intercooler.

Lexus is planning about 235 horsepower and 260 lb-ft of torque from the new engine in the NX 200t. The IS 200t is reported to be closer to 250 horsepower and likely about 275 ft-lb of torque. As of today there has been no announcement by Lexus regarding which fuel type the engine will be required to run, regular, or the much more expensive premium grades.

The Other Side of This Topic:
New study highlights switch to smaller engines despite growing consumer concern
2013 Acura RDX highlights myth that turbo engines are more fuel efficient
4 cylinder turbocharged engines challenge the power and efficiency of a V6, but come up short

Image and video credits shown when video is viewed.