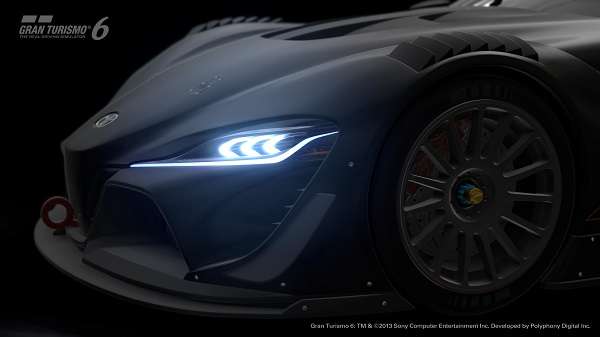 Can an automaker make a virtual car for gaming and then not make it a production model. Maybe, but the evidence is mounting that the Toyota FT-1 will be the next Supra.
Advertisement

The name FT-1 Vision GT does not roll off the tongue as easily as “Supra.” Still, fans of the Toyota grand touring/sports car of the past still look forward to its return and any name will do – for now. Yesterday Toyota made an announcement that seems to indicate the car might actually be coming back.

Virtual Cars Become Real Cars
Toyota has partnered with Gran Turismo 6 to create a gaming version of what might be Toyota’s next true sports car. The FT-1 will soon be available for virtual driving. That is exciting, but what it says about the possibility that this car will be a reality someday soon is much more exciting. Toyota would be crazy to create a concept car, virtual car, and build hype without someday releasing the actual car.

FT-1 Vision Is A Place-Holder Name
FT is Toyota’s prototype designator for a sporty car. For example, the FT-86 became the US’ FR-S sports car. In some markets, FT-1 may indeed be the name of the possible vehicle. Hopefully, if the vehicle is a rear-drive, 6-cylinder car, it will be called Supra. Using a forced induction 4-cylinder and hybrid drivetrain has been talked about by some as a possibility for the future car, but that would not really be a Supra.

Supra Legacy
The Supra began as a rear-drive Celica in the late 1970s. Over its four generations, it became more and more capable and ultimately was one of the best grand touring cars on the road. The coupe always had an in-line six-cylinder engine and turbocharged versions were available in the last couple generations. The car was discontinued in 2002. Toyota may have backed away from the Supra to step back to more practical on-road sporty cars. In its final years the Supra was so capable it was more than a practical (affordable) GT car, and had become a near-super-car for its time.

Lexus will soon be offering the RC 350 and RC F coupes which have much in common with the Supra. It will be interesting so see how the FT-1 and RC F coexist in the market if Toyota does indeed move the FT-1 forward as a production model for sale through Toyota dealerships.

Panasonic Updates Profit Forecast, Noting How Much Tesla Batteries Help The Jump
2022 Porsche 911 GT3 Laps Nurburgring in 7:04 With Journalist Behind The Wheel
END_OF_DOCUMENT_TOKEN_TO_BE_REPLACED