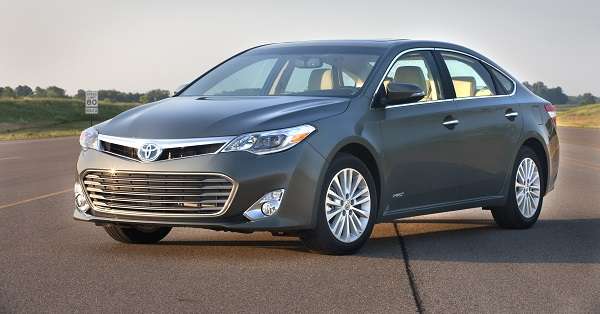 Toyota earned three amazing green car honors this year. The most impressive thing about the achievements is how diverse they were. The Prius did not make this list in case you are wondering.
Advertisement

In 2013 Toyota accomplished three huge green car achievements. Most impressive was that the amazing things were done in a small sport ‘ute, a full size luxury sedan, and an economy car with no electric drive. If you think the Toyota’s green car claim to fame ends with the Prius you are wrong.

2013 Avalon Best Green Car Award
Toyota’s redesign of its largest car, the Avalon was reason enough for celebration. Reviewers who actually drove the car and then checked the sales figures learned that the car was not only sensational to drive, but that buyers flocked to showrooms to buy it. For all of 2011 and 2012 Toyota sold the Avalon at a decent rate of about 29,000 cars per year. After the redesign sales leapt to more than double that. This year Toyota will sell about 70,000 Avalons. The Avalon is a moderately expensive, full size car. Compare its sales to any Buick or Lincoln model and you will see where America now shops for such cars. What made the Avalon’s sales most fascinating was that fully 25% of the cars sold were hybrids according to Toyota. No other car maker sells a car this large, in this volume with such great fuel efficiency (except Lexus!). That is why the Atlanta auto show voters (journalists and auto experts) awarded the 2013 Toyota Avalon the Best Green Car Award.

2013 Toyota Corolla LE Eco
The 2013 Toyota Corolla continued the amazing sales volume of its predecessor with a sell rate of about 300,000 units per year. A good percentage of those, between 10 and 20%, will be cars that can achieve up to 42 MPG highway. That number includes no expensive electric drive and no drivetrain batteries. Even better, it is the most powerful of the Corolla line-up, not some de-rated obscure special model nobody will ever see or buy (Yes, we are poking fun at the Civic). This is first generation hybrid mileage territory from a very comfortable, very inexpensive, and shockingly large car. Toyota did not use just one method to achieve this amazing level of efficiency in a car that costs about $20K. Rather, like Mazda, it took a holistic approach, but there were really three big things it did which we covered previously. Volume matters when it comes to green cars. Cars with zero emissions that don’t sell don’t help the environment. The Corolla is the leading selling four-door in its enormous and affordable car class and it is also the most fuel efficient. It is also more fuel economical, less expensive, and cleaner running than its diesel rivals. The 2013 Toyota Corolla was a finalist in Green Car Journal's annual Green Car of The Year Award.

2013 RAV 4 EV Electric Vehicle
Toyota barely sells the RAV 4 EV and this writer loves to take cars that do amazing things in tiny numbers to task. However, the RAV 4 EV is important for a couple of reasons. First of all, the Southern California based Green Car Guide chose it as its number one Green Car for the year. That is saying something. The company did not pick the Leaf, the Tesla Model S or the Volt. More importantly, the RAV 4 is a collaboration between the world’s two greenest car companies, Toyota and Tesla. There is much buzz on the blogosphere right now about GM possibly buying Tesla. That is simply a headline grab by an expert nobody in the car world has ever heard of. To date, Tesla has only collaborated with one automaker to put a vehicle on US roads and that is Toyota. If a partnership or later buy out is to occur it is always more likely to be between two companies that already work together and have common values. For now, any possible mash up with Tesla would most probably be with Toyota.

So there you have our list of Toyota’s three most important green car advances in 2013. The fact that the Prius, which outsold all the EVs in the world combined this year, is not on the list is what makes Toyota’s accomplishments newsworthy.