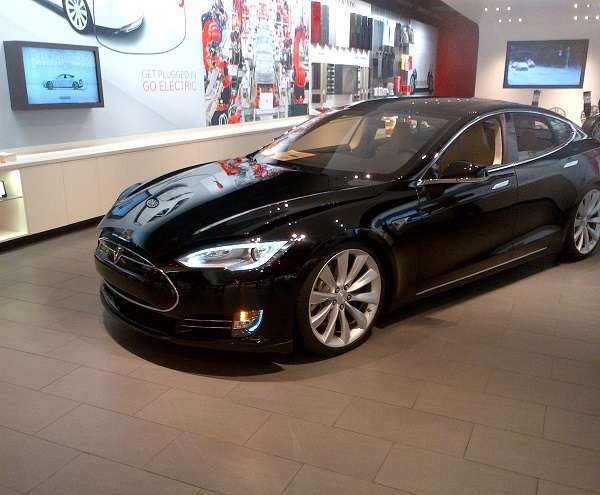 2013 will be remembered as the year that Tesla Motors broke out and became a true manufacturer of top quality automobiles. Here are the most amazing things the world’s most exciting electric car maker did in 2013.
Advertisement

Tesla’s Roadster was cool, but it certainly was nothing compared to the 2013 Model S super-sedan. The Roadster was in many ways a high-tech conversion of a Lotus. It was a dynamite proof of concept and it propelled the automaker form start up to rookie automaker. In 2012 the automaker launched its new Model S to much fanfare, controversy, and commentary. Whether the automaker did or did not achieve its goals in 2012 no longer matters (we say it did). What is without question is that Tesla became a huge force in the automotive industry in 2013. As we approach the New Year, let’s look back and count down the top 5 achievements by the electric car company many know and love.

1) Tesla Profitability and Cash Flow Positive - In 2013 Tesla made money in at least two of the four quarters. Imagine that. How long did it take Amazon.com to achieve that? There have been years when the most mature and powerful automakers in the world did not make money for half the year. This is our number one because if a company can’t make money it dies.

2) Early Repayment of Government Loans – Tesla paid off its loans, mainly through force of will of its leader Elon Musk. The story has been told in great detail, but the truth is this silenced critics, including this writer, and set Tesla on its own path. Doing it almost a decade early and in the same year that the taxpayers lost $10.2 billion on GM was a perfect one finger salute to the auto industry giants.

3) Model S Consumer Reports Rating – Unlike the Fisker Karma which could not complete its CR testing due to mechanical failure, the Tesla Model S achieved one of the highest scores ever by the consumer watchdogs. We respect CR, even though at least one of their auto reporters doesn’t own a car. Sort of like a vegan critiquing a steak house, but we digress. CR is an important of automotive yardstick and Tesla didn’t just measure up, it set a new standard.

4) Model S NHTSA Safety Rating – Quality and safety are the two things we read about most often about cars that the automakers themselves don’t measure. Unlike fuel economy, performance, style and other such factors, safety and quality are determined by third party testing and surveys of actual customers. The perfect complement to the top quality rating was the top safety rating by NHTSA.

5) Tesla Supercharger Roll Out – Elon Musk comes up with some zaney ideas. And then he builds them. The only guy at the party with a spaceship, he also is the only guy at the party who has his own global network of vehicle fueling stations. Free of course, why nickel and dime paying customers? We would like to sneak in the battery swap under this category because to us it is the next iteration in an already amazing rethink of how the world powers its vehicles.

Many 2012 Tesla Model S owners passed the one year mark with their cars recently. Visit any Tesla forum or blog and you will simply be taken in by the enthusiasm and joy these owners are feeling right now. Given the momentum the company has it is easy to see this story becoming an annual countdown of amazing Tesla milestones. We think this is the top 5, but others may disagree. We would love to have your feedback below on some of the other incredible things Tesla did in 2013. Please comment below and feel free to elaborate on which topic above you think should be number one overall.