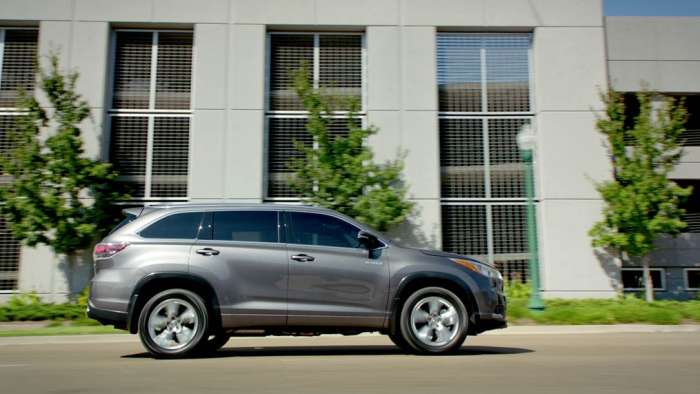 The 2014 Highlander is outselling its two closest rivals, the 2014 Nissan Pathfinder and 2015 Honda Pilot. Here’s why.
Advertisement

Highlander Seating Is the “Right-Size”
The new 2014 Toyota Highlander is very similar in terms of exterior dimensions to its two closet rivals. However, inside the Toyota offers buyers a choice of 7 or 8 seats. The Pathfinder can only seat 7. The Pilot seats 8. However, the Pilot always seats 8. In the Highlander, a buyer can select either two plush captains’ chairs in the middle row or can choose a bench with 3 seats across in popular trims. Perhaps people like the option to choose their number of seats?

Highlander Safety
Safety in a family car is paramount. The Toyota Highlander was recently tested and it tops both the
Pathfinder and the Pilot. The 2014 Highlander is an Insurance Institute for Highway Safety (IIHS) Top Safety Pick+. The Honda Pilot did very poorly on the small frontal overlap test conducted by the IIHS and could not earn this level of safety. In fact, the IIHS commented on the Pilot’s crash test results on this test saying “The Honda Pilot was the worst performer in this group. The driver’s space was seriously compromised by intruding structure.”

The 2014 Nissan Pathfinder is also unable to earn the top rating because it does not offer front collision prevention, something that almost all its peers now offer. When it comes to safety the Highlander’s safety rating cannot be beaten.

Highlander Fuel Economy and Drivetrain
In this category the most popular selling configuration is V6, all-wheel-drive. The 2014 Highlander in this configuration and the 2015 Honda Pilot both offer an excellent drivetrain. Power is smooth and plentiful and both achieve the same government fuel economy estimates of 20 MPG combined, 24 MPH highway. Our recent testing of the 2014 Toyota Highlander exceeded both the combined and highway estimates.

The 2014 Pathfinder would seem to have the edge on its competitors. It has 1 MPG higher ratings across the board. However, rather than a smooth shifting transmission type that most buyers are accustomed to, the Pathfinder uses a constantly variable transmission (CVT). So many sources cite problems with this transmission it is hard to know where to begin. Car and Driver tested the redesigned Pathfinder and said “the transmission started acting up. One driver said it felt like the engine was lugging in too high a gear, another described it as similar to a misfire, and yet a third characterized it as “rumbles and groans.” Motor Trend said “While the cabin is a nice place to be, a CVT burdened with moving a 4200-poundSUV could be a recipe for drivetrain disaster." Edmunds had trouble too, and the entire drivetrain of their test vehicle had to be replaced. Clearly, the choice of a CVT for the Pathfinder has hurt Nissan’s sales.

Conclusion
The Highlander has the perfect combination of safety, fuel economy, seating, drivability and an excellent reputation. Given this combination, it is no surprise the 2014 Highlander is the choice for more buyers.

Our full review of the 2014 Toyota Highlander can be found here.