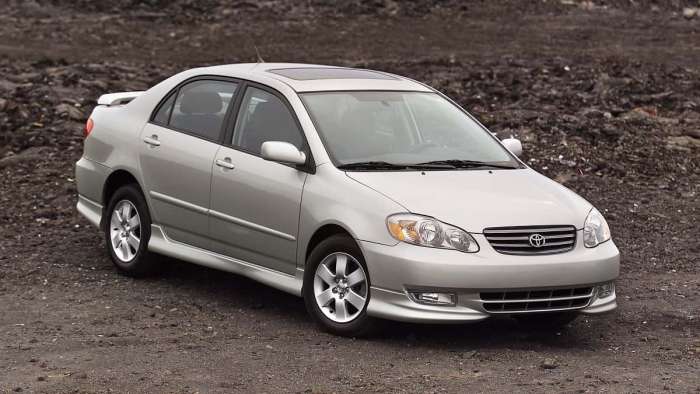 The Toyota Corolla can be a great used car buy. Just watch out for these issues and trouble years.
Advertisement

Toyota’s Corolla is a used car icon. It is well-known as a great used car purchase. Toyota’s legendary durability, reliability, and quality have earned the Toyota Corolla the status of a sought-after used car. Now that the accolades are complete, let’s face facts; Some years of the Toyota Corolla have proven more reliable than others. If you are shopping for a used Toyota Corolla, here are some problems and some years to be aware of.

Used Toyota Corolla Problems To Be Aware Of When Shopping
The Corolla is a relatively simple car. Particularly when it comes to in-vehicle electronics and features. Hey, look at the upside – it’s less stuff to break. So what does break? To find out, we turned to CarComplaints. The site is a listing of owner-reported problems for specific models and model years. It is a valuable resource for those shopping for a great used car. By scanning the volume and grouping of the complaints owners took the time to report, one gets a sense of the things to watch out for and the years to avoid.

One problem that some Toyota Corollas have suffered from is excessive oil consumption. This can lead to engine failure and high costs. The typical cost is over $2,600 and it start around 97K miles. Here’s what one owner reported to CarComplaints with the colorful language edited out : “Wish I had known this was a problem before I replaced the first engine because now having the same problem with the replacement! My daughter bought this car new and the engine blew at 58,000 miles (one month out of warranty). We replaced the engine and I got the car from her when she bought a new minivan. Now the car has 20,000 miles on the used replacement engine and uses excessive oil every 300mi or so. I've used only full-synthetic and just holding my breath until this engine blows.”

Used Toyota Corolla Years To Avoid When Shopping
Owners have reported the Corolla’s engine problems as far back as the model year 2000 cars and as recently as the 2009 model year. That is a pretty long span, but the complaints are not linear. The most occur in years 2002 and 2009. Both years have been branded with the “Beware of the Clunker” stamp of disapproval by CarComplaints. We would suggest that shoppers use caution when shopping in this span of years and avoid the 2002 and 2009 model years. With millions available, why purchase a car from the peak years of trouble reports?

Related Story: Shopping For a Used Toyota Camry - Here's The Year and Color To Avoid At All Costs

Why You May Want To Avoid White Corollas
Another issue to be aware of if you are shopping for a used Toyota Corolla is the Blizzard Pearl and Super White paint. There is a known paint defect that causes it to fall off on some cars. Toyota is offering help to owners of some years to deal with the problem. Rather than wade into that, why not just buy another color?
If you have a Toyota Corolla and have had any of the above-mentioned issues please tell us what your experience has been. Your comment below may help a fellow owner.