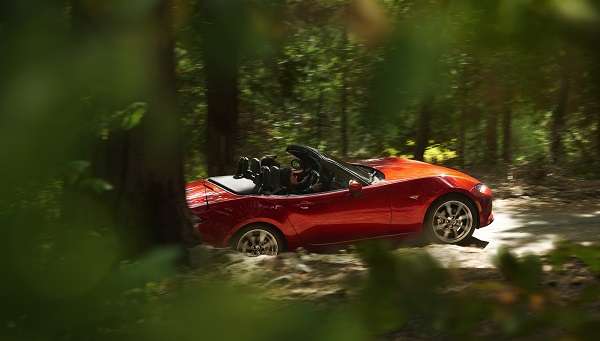 Based on our knowledge of the Miata, and how it is used, Miata drivers may see 33 MPG on their rides.
Advertisement

As a vehicle tester I am always surprised when I hear an urban myth like “Hybrids don’t get their rated fuel economy in real life”, or “diesels get much better mileage than their EPA rating.” The fact is, if you drive the cycle the test is modeled on, you will get pretty much what the EPA estimate is. Having tested about 50 vehicles of all types now, it is my opinion that the EPA does a fantastic job. Except concerning Sunday drivers like the MX-5 Miata. That’s because some cars are not intended to be used as daily drivers, and the EPA test cycles are all about daily driving.

Miata's Fuel Economy In Regular Traffic
Yes, if you slog to work in urban traffic in a Miata you will get the EPA rated mileage. Also, if you drive the highway miles the EPA cycle is modeled on you will get the EPA rated mileage. However, a significant majority of Miata owners don’t use their cars that way. Some do. My condolences to them, because as a long-time Miata owner I know the Miata is terrible as a city commuter car and uncomfortable as a long-haul highway car. However, on a road trip, mostly on back roads with the top down, it is simply brilliant. And on those back-roads trips the third generation Miata returned 27.5 MPG.

Prior Generation Miata Fuel Economy
I know this because I not only owned a 2007 Miata with the 6MT (manual six-speed transmission), but because I have also tested the same generation Miata twice. All three cars got 27.5 MPG on premium fuel. The cars were scary in their repeatability. On long highway trips, the few I made, the Miatas all returned about 34 MPG. If you are a gen-3 owner, please tell us below what you have recorded.

Our Real Life Miata Fuel Economy Estimate
The new, 2016 Miata, is EPA-rated at 27 mpg city/34 mpg highway/30 mpg combined. This compared to the prior car being rated 28 MPG highway and 25 combined. Extrapolating the percent savings that the new EPA numbers show compared to the outgoing car, my estimate is that the 2016 Miata will return about 33 MPG. That is darn good for any car, but off the charts for a sports car.

Miata Still Needs Premium Fuel
One negative remains concerning the Miata. Although the 2.0-liter, 155 HP engine in the Mazda3 is rated for regular unleaded fuel, the new MX-5 Miata with an engine of those same specifications, retains its thirst for premium. Had Mazda simply kept the old engine (with its 167 HP) and found a way to have it run well on regular, the fuel costs to owners would have been about the same.