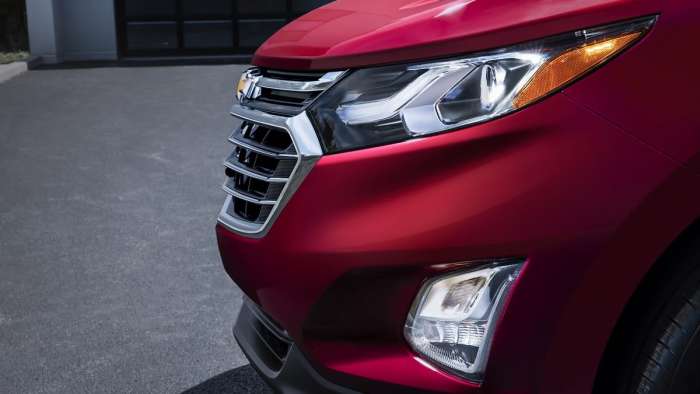 The Insurance Institute for Highway Safety (IIHS) is the safety group who conducts the most rigorous safety testing of vehicles in America. You have likely heard the expression, "Top Safety Pick Plus." That's the group's award to those vehicles with the best safety ratings. Thanks to the testing this group does, some automakers are dropping the lousy base-model headlight that shoppers of all but the top trims have had to endure.

IIHS says that no fewer than ten automakers have improved their 2021 headlight offerings by eliminating or modifying inferior choices. We've been covering the IIHS headlight ratings since the headlight test was added earlier this decade. The IIHS TOP SAFETY PICK+ award is driving the headlight improvements. The reason is that beginning in 2020, vehicles have only been able to qualify for the higher of the Institute’s two awards if they come equipped with good or acceptable headlights across all trims. The "All trims" part is key. IIHS gave automakers a few years to catch up. The Top Safety Pick Plus rating changes as time passes, and it becomes ever more difficult to earn the award. One example of the inclusion of headlight performance in the IIHS rankings was the Toyota Prius losing its top safety rating for 2018.

“It’s common sense that quality headlights protect against nighttime and other low-light crashes,” says IIHS President David Harkey. “But even when manufacturers have offered good headlights, too often they were expensive add-ons
that could be hard to find.”

If you purchase a new base or mid-trim Audi A7, Honda Accord, Hyundai Palisade, Mazda CX-30, Nissan Altima, Subaru Ascent, Toyota Highlander, Volvo S60, Volvo XC40, Volvo XC60, or Honda Odyssey, the headlights you get will be better because IIHS pressure automakers to make this change by offering the "carrot" of the TPS+ award.

“More manufacturers are going to a single headlight package for many 2021 models, which is a big win for consumers,” Harkey says. “Sometimes, taking an inferior piece of equipment off the market is as important as the invention of a better one.” 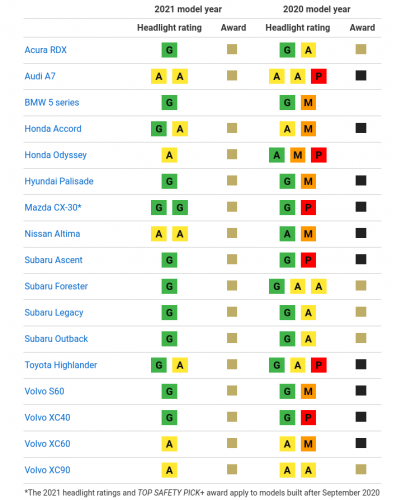 Even if you are not a new car shopper this year, this change will benefit you. One of the most common reasons for headlights to earn a low score on IIHS testing is excessive glare. The headlights you see in oncoming traffic will blind you less due to the pressure IIHS is putting on automakers to do their jobs better. The best part of all is your tax dollars didn't go to IIHS for these headlight tests and never have. IIHS is a non-governmental agency funded by a group of America's largest insurers.