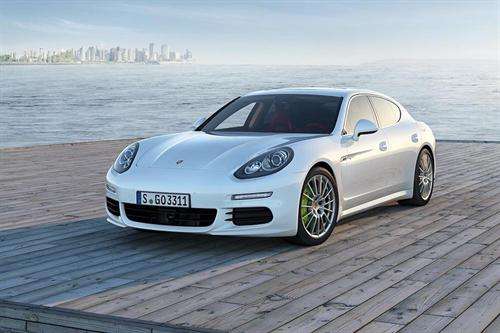 Porsche continues the trend of automakers challenging the definition of electric car. Offers a car that can drive tailpipe emissions free to work on electric power only and still packs 416 horsepower even without a V8.
Advertisement

The new 2014 Panamera S E-Hybrid will be a revolutionary car for the automaker. Unlike its extreme and limited 918 Spyder specialty car developed more as a technology showcase than mainstream model, the Panamera S E-Hybrid will be available in a price range and in production numbers the bulk of Porsche’s customers can enjoy. In an advancement over the previous Panamera hybrid model, this car is a plug-in hybrid. Owners can charge up at home and then drive on electric power only.

The new Panamera S E-Hybrid improves upon Porsche’s previous Panamera S Hybrid in every measurable way. Porsche does not yet have fuel economy numbers, but they are expected to be better than prior models. Typical powerful plug-in hybrids can easily top 75 MPGe. The biggest change will be electric-only operation. The Porsche Panamera S E-Hybrid will be capable of driving approximately 20 miles on electric only power. More importantly, this car is not limited to any reasonable top speed in electric only operation. Capable of operating up to 84 miles per hour on electric drive alone, the car can easily exceed the speed limit on US roads. Should the customer have the car on a closed course, the top speed using both gas and electric power is 167 mph.

Porsche envisions the electric drive to be used in the most fuel consuming of scenarios. For example, in city driving or commuting to work. In effect, what Porsche will be providing customers is a pure sports luxury sedan with no compromises that also can be used tailpipe emissions free as a daily driver on the way to and from work. This type of combination could be the wave of the future for cars targeted to affluent buyers. These cars already have prices that approach $100,000. Adding in a hybrid drive or even a plug-in hybrid system may only cost about as much as a ceramic brake option. As costs come down more and more automakers will be putting some type of plug-in hybrid system on powerful premium cars. One huge advantage of doing so is that it will enable those automakers to better achieve their overall fuel economy targets required by federal mandate.

The new Panamera S E-Hybrid will be powered by a 416 horsepower drivetrain. From a standstill the car will accelerate to 60 mph in just 5.2 seconds. That is on par with a Lexus GS350. It is also about the same as a lower-specification Tesla Model S. The transmission for the car will be the Tiptronic S automatic.

Like most plug-in hybrid cars the Panamera S E-Hybrid can precondition the car’s interior while plugged in at home at night, or via a mobile app if the vehicle is plugged in anyplace, any time. This saves fuel and is more convenient for the driver regardless of the energy saved. The car also features a coasting feature that disconnects the gasoline motor under low load conditions, such as on the highway and uses the lithium ion batteries and electric motors to continue the car’s momentum.

Other Porsche Panamera S announcements include a move from V8 engines to twin turbocharged V6 engines. The engines are both more powerful and also more fuel efficient than the outgoing V8s. Look for a special, top of the line Panamera to still have some kind of V8. Porsche is also offering two more variants of the body with longer wheelbases to be used more as 4 or 5 passenger executive sedans. In total there will now be 9 Panamera models in the US market.

Prices for the base Panamera (if one is ever built) will be in the high $78K range. The Panamera S E-Hybrid will start at $99K and the top of the line Panamera Turbo Executive will start at $161,000. Delivery of the new generation of cars starts in late 2013.

LG's New EV Battery Plant Is a Welcome News for Tesla
Tesla Giga Berlin's New Hurdle: It's Not Only the Gov't, but Now Tesla Itself
END_OF_DOCUMENT_TOKEN_TO_BE_REPLACED