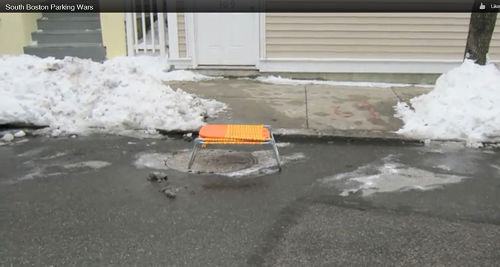 Parking in Boston costs more than the car itself - part 2, the 99%

The working wealthy in Boston buy themselves parking spaces, but how do most residents and visitors deal with the challenges of parking in a city built before cars?
Advertisement

In Boston, the only thing harder than a diamond is paakin’ ya caa. In part one of this story, we examined how some working-wealthy Boston residents deal with the challenge of city car ownership. Buying a space, then paying taxes on the ownership of the space, and also HOA fees to maintain the space, are just part of livin’ laaaj in Boston. Here’s how some other people manage parking in the Hub. (Which is short for Hub of the Universe, I kid you not)

Logan Airport
Those who have flown from Logan Airport during a school vacation week know that the airport does not have enough on-site parking to accommodate the number of travelers. Nothing is more fun than arriving at the airport on the way to Disney 2 hours early only to be turned away at the parking lot and told to follow the signs to the off-site lot, which is also the economy lot where you get to pay $18.00 per day. Then, unload all your car seats, strollers, bags and kiddies, and hop on the little bus that will take you all the way back to the same spot you were just at. Guess what? You’re not going to be at the ticket counter for a long time mom and dad. Those lucky enough to find a space in Central parking will pay about double the economy rate for the day. If you’re a frequent flyer and you don’t want to worry about it, Logan will help you join the Lexus Parking PASSport Gold program. After your initial joining fee of $200.00, the Commonwealth’s airport will allow you to have a reserved spot at the airport. Then you will pay $49.00 for day one and then the low, low rate of $32.00 per day. The best way around all this is to buy a Fisker Karma for about $125,000.00. If you do, you can park right up front next to the terminal doors in the reserved “clean air vehicle” spots that those able to afford electric toy supercars get to use. Chargers are available of course.

Southie
In Southie (South Boston, which is not all the same as the South End) if you break the unwritten rules your car will have all the tires slashed. Or it might be you that is slashed. In this tough neighborhood where blue collar, low income, and yuppie newcomers coexist (not) there is a longstanding tradition of double parking, and reserving your space in the winter. The way that you reserve your space is this: First your grandparents come to America from Europe, preferably Ireland, and they rent a triple decker home, or buy the home. Then cars become popular. Next you are born and grow up in the house. The space outside is yours if you claim it in the winter by shoveling it and then putting a baby stroller or a cone, or a garbage can, or a lawn chair in the spot you leave. If anyone ever touches your lawn chair, or parks in your spot – see first two sentences of this paragraph.

Brookline
Brookline is like Southie except completely different. In this section of Boston (birthplace of JFK), there are entirely different rules. No double parking. You will be jailed immediately. There are no spaces to reserve with a lawn chair because there are no spaces. Quoting the Town of Brookline’s parking rules from its website “Daytime Parking – No driver may park a vehicle on the same street in Brookline… for more than 2 hours.” “Nighttime Parking – No driver may park on any street, or any Town-owned off-street parking facility for more than 1 hour. “ If you thought you read this wrong you did not. Those who live in Brookline, and anyone else for that matter, cannot park there overnight on the streets they themselves own. However, the town does have an overnight guest program. The town has a pass a homeowner can purchase and then the overnight guest can park in one of the town’s overnight guest spots which are scattered across the neighborhood. There are 83 spots. Brookline has a population of 58,732.

Cambridge
Ask anyone from any state except Massachusetts where the best schools in the Commonwealth are, and they will say “Boston of course.” They would be mistaken. MIT and Harvard are actually in Cambridge, which is not part of Boston. However, it is directly across the Charles River, so let’s include it. Cambridge is great because it has its own parking rules and they are basically this; People who live here get a little window sticker. It is wicked cool to not remove the old stickers. The more stickers you have the more Cambridge you are. All the other people don’t get a sticker, instead they get tickets. Like President Obama. He went to Harvard like all the presidents do, and he got tickets for doing all sorts of bad things according to the Boston Globe, like parking in a bus stop. Yes, our president who is all about public transportation owned a car when he went to college in a city with the world’s most comprehensive public transportation system. Then he blocked the people on the bus from getting on and off safely by parking said vehicle illegally. He paid his tickets though. The week before he announced he would run for president.

Video and Picture Courtesy of DaveML 1981 and Youtube.com