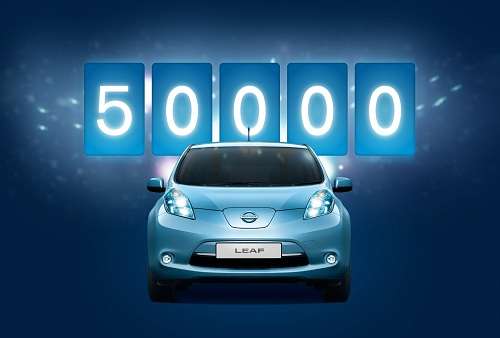 Nissan announced today that the Leaf electric vehicle has passed a critical milestone in production. Nissan claims that 50,000 Leafs have been produced worldwide. This makes the Nissan Leaf the most widely sold electric passenger car of all time. The Leaf went on sale in December of 2010. In the little over two years it has been available sales have steadily grown.

2013 Nissan Leaf Production Plans
The Nissan Leaf is not the top selling electric drive vehicle in the US market. The Chevy Volt beats it every month. However, it is making gains in the US, and plans are underway to increase sales. Electric vehicle enthusiasts point out that the main reason the Leaf has not sold better is that Nissan cannot build enough of them. Torque News electric vehicle expert, David Herron, has been tracking the progress of the Leaf since its inception. In January he provided an upbeat projection that the Leaf will soon be built in the US for US customers. The plan is for Nissan to build the Leaf locally, rather than at one location for global sales. That affords Nissan two benefits. First cost will be better aligned with the competition since the currency will not affect its competitiveness. Second, more production, in more places will help to alleviate any bottlenecks, and simply add more capacity for the vehicle.

The Leaf is slated to built in Smyrna Tennessee. The US taxpayers are helping to build the Leaf by providing loans via the Department of Energy. This is not uncommon. Taxpayer dollars in the form of loans have helped to provide financing to every major EV for sale in the US. This includes Tesla and Fisker, companies that serve wealthy clients. Both the Fisker and Tesla products are generally sold in the $100,000.00 range. The idea is that eventually these companies will develop technology that will enable the average vehicle buyer to purchase an EV. That day may well be approaching. There are a number of electric drive vehicles for sale and for lease in the US now that have MSRPs in the mid to high thirty thousands of dollars range.

2013 Nissan Leaf Pricing Projections
The Leaf may well lead the charge for more affordable EVs. Mr. Herron projects that the MSRP for the 2013 and 2014 Leafs produced domestically in the US will have MSRPs as low as $32,000.00. After tax rebates buyers in states like California may see an actual buy price of just over $21,000.00 for the most basic Leaf made. More typically equipped models will likely cost buyers about $25,000.00 after tax rebates are factored in.

Nissan Leaf Battery Range
In addition to lower costs Nissan revealed last year that the battery packs were making progress. More range will be available in the current version of the Leaf. An EPA estimated range in the low 90s is more than possible with current technology.

Although the Leaf does not sell as well as the Chevy Volt, which is the highest selling electric drive car in the US, the Leaf may do better when the new pricing and new range numbers become part of the Leaf’s marketing. The Leaf will have to make gains fast in order to stay on track. This week both the Honda Fit EV and the Honda Accord plug-in hybrid (PIH) became available to buyers on the East and West coasts. The Ford Focus Electric, and Ford’s rapidly growing portfolio of electric and hybrid drive cars are also bound to impact Leaf sales. Toyota’s new RAV 4 EV built with help from Tesla, and the venerable Prius, which can now be bought in PIH form, and in 3 sizes should also cause Nissan some worry. The question is will the pool of US buyers willing to buy an EV or plug-in hybrid grow as rapidly as the suddenly crowded field of EVs and PIHs?

LG's New EV Battery Plant Is a Welcome News for Tesla
Tesla Giga Berlin's New Hurdle: It's Not Only the Gov't, but Now Tesla Itself
END_OF_DOCUMENT_TOKEN_TO_BE_REPLACED