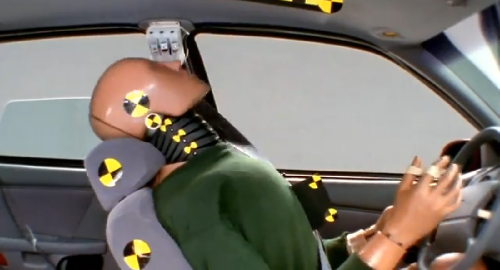 The most common auto insurance injury claim is not from a major crash or a big frontal impact. Here is what to pay close attention to when shopping for a safe car.
Advertisement

According to the Insurance Institute for Highway Safety (IIHS) fully a quarter of all the insurance money all companies paid out in 2007 was for neck injury claims. The total cost to insurance companies, and thus all of those who pay for car insurance, was $8.8 billion in that year alone.

The IIHS decided to begin testing cars for their ability to protect a driver from whiplash in 2004. The cost to conduct rear end collisions along with all the other types of crash tests IIHS does on one specific model would have been huge, but fortunately the IIHS has found a way to conduct a rear-crash seat test that does not require the vehicle to be destroyed. IIHS uses a test sled that holds the actual car’s seat in which a crash test dummy is sitting. Using compressed air the sled is “bumped” and the test can show how well a given model would protect you from a vehicle similar in size slamming into you from behind at 30 mph.

The head movement of a person in a seat with an older style headrest compared to the new styles found on virtually all new cars is dramatically different. By controlling the snap back of the head and the angle at which it tips back the headrest can prevent injury to the occupant’s neck. The video illustrates this perfectly. It is also easy to see why neck strains are the most commonly reported injury in all car insurance claims.

Drivers who are hit from behind (as this author was recently) should thank the IIHS. When the Institute began dynamic head restrain testing and rating in 2005 more than half of the vehicles tested received a “poor” rating and only 9% were scored “good.” However, by 2013, due mainly to the IIHS test and rating system, manufacturers had improved head restraints so much that of cars tested none received a “poor” rating and fully 91% received a “good” rating. David Zuby, the Chief Research Officer of the IIHS, commented on the effect ratings had and the evolution of the seat design by manufacturers saying “We have done a study that shows that the seats we rated good do in fact reduce the risk of neck injury. So we know that as manufacturers have changed seat design to earn good ratings on our test that we are in fact making vehicles safer in these rear impact crashes.”

The IIHS has a sister group, the Highway Loss Data Institute that does these fact based studies to ensure that the laboratory tests and resulting ratings, actually afford drivers a real world benefit.