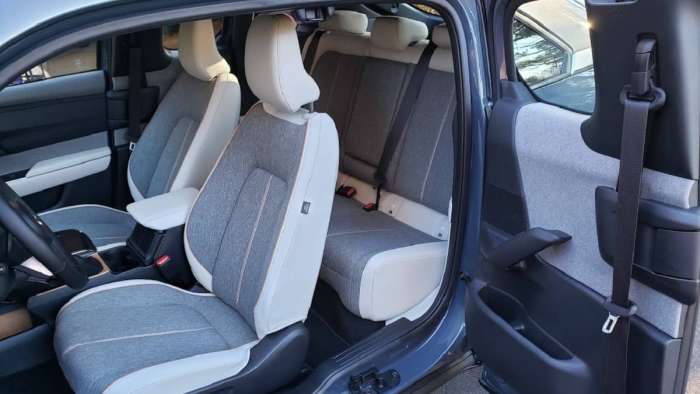 The new Mazda MX-30 battery-electric vehicle has achieved a very good score on government crash testing, despite a door design that had some wondering if they were unsafe.
Advertisement

When this engineer’s eyes saw the new MX-30’s odd side door design they saw trouble. In both the National Highway Traffic Safety Administration’s (NHTSA) New Car Assessment Program (NCAP) and also the Insurance Institute For Highway Safety’s (IIHS) testing programs, side-impact testing is among the most difficult on which to score highly. Automakers know how to score well; A big-strong b-pillar. Which the MX-30 lacks entirely.

Of course, anything is possible. Beef up the door itself, add some latching that can withstand a strong side impact, and perhaps the outcome won't be so grim. I should not have doubted Mazda. This is the company that was the first to score Good on a side impact test recently made harder by IIHS.

The latest news is that the MX-30’s unique design of the MX-30’s freestyle doors proved worthy in both side barrier and side pole crash tests on the NCAP test to earn 5-star ratings on both portions of the test. “We aim to offer a confident and joyful driving experience with industry-leading safety features that support and protect our drivers and passengers,“ said Mazda North American Operations President and CEO Jeff Guyton. “We work hard to make sure your Mazda has been designed to give you the very best protection and we are proud to have the MX-30 earn the government’s top rating – the NCAP 5-star Overall Vehicle Score.“

Although we at Torque News judge the IIHS testing protocol to be more rigorous than the NHTSA NCAP, it is worth noting that all 2022 model year Mazda vehicles tested to NHTSA’s New Car Assessment Program criteria have received 5-star Overall Vehicle Scores.

The new MX-30 created quite a buzz when it was released as a battery-electric vehicle (BEV) with just 100 miles of range. Despite that limited range, the vehicle managed to outsell all of BEVs sold in Q1 by some pretty notable brands such as Buick, Subaru, GMC, and even Toyota. Mazda is planning an extended range plug-in version of the MX-30 to be revealed later in 2022.

Looking at Mazda’s open concept door design, are you surprised the car passed its testing with such a high score? Tell us in the comments below.