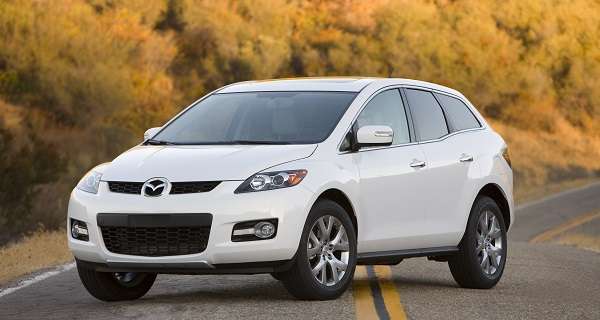 The 2007-2-12 Mazda CX-7 has an important safety recall.
Advertisement

Mazda Announced an important recall for the now discontinued CX-7. The Mazda CX-7 was a compact crossover made from 2007-2012. The full breadth of the production years for the vehicle are being recalled for a possible loss of steering control.

The problem is that the ball joints of the CX-7 could allow in water. In states where salt is used as a snow and ice treatment, the ball joints could corrode and result in a failure of the part. Ball joints are part of the front suspension of a vehicle and if they separate the wheel can be uncontrolled. A loss of steering control can result leading to a crash.

Mazda plans to notify owners by mail. Dealers will replace both front lower control arms, free of charge. However, parts are not currently available.

You can check to see if your Mazda is covered by this recall at this link. Mazda’s recall number for this is 9716H.

David Corwin wrote on October 29, 2016 - 7:52pm Permalink
We own a 2012 Mazda Cx7 and my 16 yr old daughter was just driving to work which is only 2 minutes from our house. The car felt funny and couldn't steer it she lost control and slammed into a concrete wall. She was very lucky she didn't get killed. Why didn't Mazda notify owners sooner or even by email to say not to drive it. This is ridiculous!
SERGIO Mireles wrote on December 31, 2020 - 5:13pm Permalink
Is this still available for my vehicle to get those parts even if i live down south?