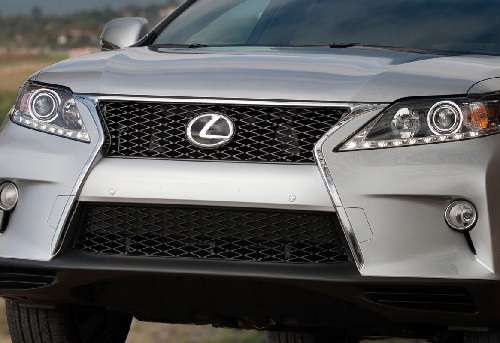 Lexus is planning to dominate the premium small crossover market when it introduces its new vehicle. Two versions are possible, a super-efficient hybrid and a rocket with a V6. Here's how they will do it.
Advertisement

Imagine yourself a buyer of a premium small crossover like the BMW X3 looking for amazing fuel economy and $40K to spend. What are your choices? There are none. Audi has its Q5 hybrid, but that with leather is nearly $55,000.00. There isn’t another compact, premium hybrid on the market. Lexus has decided it will own that marketplace starting early next year. While it’s at it, it may also make the fastest Lexus in the form of a small crossover.

Lexus announced informally earlier this year that it will use the basic platform of the new RAV4 to build a new Lexus model. The talk was that the vehicle would compete with the BMW X1, but that is crazy. The X1 is not even close to being as big inside as the RAV4, and the sweet spot in the market is the X3 size of vehicle. The new Lexus will be just a bit smaller than the X3 in terms of external dimensions, but inside it will have just as much usable space. The new model’s engine is going to be the recently introduced Lexus IS300h’s hybrid drive. That engine is a 2.5 liter four cylinder gas engine with an electric motor capable of a combined 233 HP. The new vehicle will scoot to 60 mph in about 7.5 seconds. Not slow, but not fast either. However, in terms of fuel economy, the new Lexus will set a new bar, outclassing the Q5 significantly which gets 26 mpg combined. The non-hybrid RAV4 presently gets 25 mpg combined. Our estimate is that the new Lexus compact crossover, we will call it the HX300h, will have a EPA city fuel economy of 40 mpg and a highway fuel economy of 35 for a combined 37 mpg. There will be nothing like it in the marketplace.

Price wise, Lexus can undercut the Audi by fully $10,000 and still make gobs of profit on each vehicle sold. Why? Because the engine is used so widely and because the basic elements of the RAV4 it will use are made by the hundreds of thousands. Toyota/Lexus could easily sell more RAV4’s and HX crossover vehicles than Audi sells automobiles in the US.

Looking at the new RAV4 we clearly see some interesting signs it has been prepared by Toyota for sale as a Lexus. The engine bay for example was not changed when Toyota redesigned the RAV4 for launch this year. It could have made the engine bay smaller, but it left the space that the 3.5 liter V6 used to occupy. That could mean the Lexus HX might also come in an HX350 version. If it does, this could be Lexus’ fasted product 0-60 mph, beating the mid-5 second sprints the IS350 is capable of. However, Lexus will likely de-tune the 3.5 liter V6 to about 270 hp and let the IS with its 306 hp remain the halo car for enthusiast with a Lexus in mind. The 2012 RAV4 with its older transmission with less gears had great mileage. In the new Lexus HX with a 6 or 8 speed transmission the HX350 could get 22 city, 28 highway. Whatever its engine options, a Lexus-built small crossover with a V6 would cut deeply into the Acura RDX sales charts. BMW might also see some sales lost on its X3 which starts in the mid-$40K range and runs north of $55K plus range when outfitted with its 300 hp engine.

Toyota also left room for the Lexus luxury-wise. There is no leather interior on any RAV4. Instead, Toyota offers SoTex material, which is simulated leather. So there is room for Lexus to be more luxurious with perforated leather, heated and cooled seats. The RAV4 also has only 18 inch wheels, and only on the Limited. A Lexus would surely wear 19” rims and rubber.

Taking a step back from the RAV4 after driving, one is left wondering why Toyota dropped the V6, and why it does not offer leather like its arch rival the Mazda CX-5. A new Lexus HX300h answers a lot of the questions. Look for a new Lexus line late fall of 2013 at the auto shows, and for sale in early 2014. If priced from $ 39,000 to $ 49,000, it might own that market like the Lexus RX line owns the next step up.