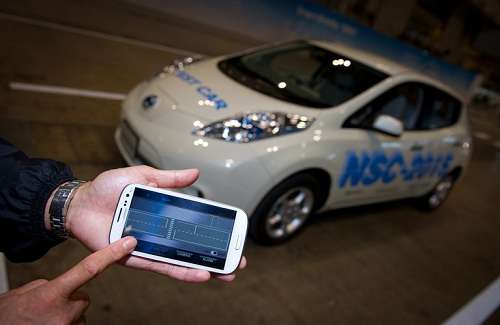 Since cars can already drive themselves why bother with hassles of city parking?
Advertisement

After a long week of slaving away at the clean energy factory one might want to get the car from the storage area and cruise on over to pick up a pal at the code mill to have dinner in the city center. The biggest hassle with that whole plan is that the parking is always such a bummer. Even the valets get backed up. If only the electric car that one (and one’s neighbors) paid so much for could just deal with all that hassle itself. It can.

Google has already brought us the self-driving car. Nissan has already brought us an electric car, the Leaf. Now the two can be combined into one appliance that will allow drivers to let the car do the parking. If a spot is available, but would require parallel parking, why not let the car do it? Doing it one’s self is difficult and embarrassing when done poorly. Just hop out tap an icon on the haptic feedback touch screen of the Droid you’re carrying and walk into the restaurant. While you walk the car will perfectly back itself into the tight spot.

If there are no spots available, rather than valet, simply be prepared. Have the location of the lot marked on the smartphones mapping app before you head out. One there, let the car drive itself to the garage and find itself a spot. When you are taking the last few sips of your decaf-soy-chai with bobbas, tap the smartphone again and summon the car. Walk out and hop in. It will be waiting in line with the other driverless cars, hazards flashing, heat running, looking for your Bluetooth connection so it can start the tunes.

If you have had a little too much to drink why not hop in the passenger seat and let the car drive back to the loft, or off to the fragrance bar, if the night is just getting started? Who would be so impolite as to drive while drinking when the technology exists to eliminate that possible hazard?

None of the scenarios outlines here are future tech. They all exist right now. They were developed so last year. Laws in Nevada and other states are already being adapted to allow for such uses of our car-appliances.

The future is past when it comes to self-parking and self-driving cars.

Video courtesy of Youtube.com and NissanNewsroom