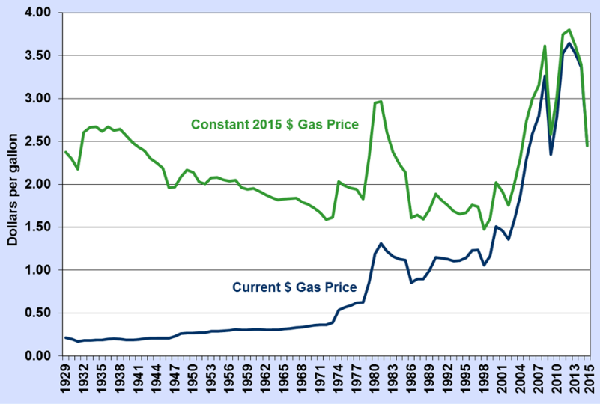 How Many Times Since 1929 Has Gasoline's Annual Average Price Been Fifty Cents From Today's Price?

We look at the annual average cost of gasoline after adjusting for inflation and find some interesting facts.
Advertisement

The U.S Department of Energy has many interesting facts regarding the price of gasoline. We found a page of particular interest while doing research on the cost per mile of gasoline cars versus the cost per mile of electric vehicles. In my state, the cost is about the same when one compares vehicles with similar space and performance, and it has been for quite a while.

The above graph shows the annual price of gasoline both adjusted for inflation (green) and also the unadjusted price (blue). Energy.gov looks at that price graph and concludes "...the average annual price of gasoline has fluctuated greatly..." But has it really over time? We decided to do a simple analysis asking "How many years have had an average price for a gallon of gas that was within fifty cents of where it is right now? With gasoline at $2.38 per gallon today, just as it was in 1929, the range we looked for was from $1.88 to $2.88.

It turns out that from 1929 through today, most years the price of gas was within fifty cents of where it is today and in 1929. There are 88 years from 1929 to present day. We used the full listing of the prices given by Energy.gov below the graph at its website and found that 33 of the years had prices outside of the fifty cent range. Only eight years had a price above $2.88 and 25 years had gas prices below $1.88.

Looking at the years when gas was expensive and gas was cheap is also a sort of myth buster. Many of us associate the decade of the 1970s as years with high gasoline prices. We all know the U.S. freaked out and tightened up on fuel economy standards in the 1970s. However, in fact, in every year of the 1970s gasoline was less expensive when adjusted for inflation than in 1957. We picked that ear because it was the year of the 1957 Chevy, a classic, big, heavy American sedan.

Notes: The price includes federal and state gasoline taxes and the year that inflation was adjusted to was 2015.