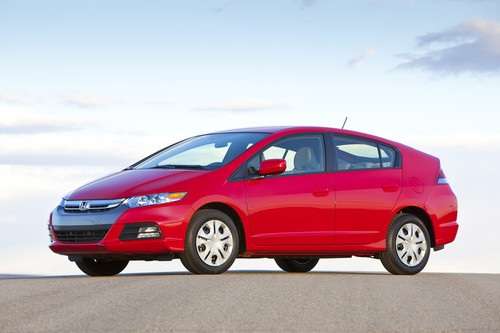 The cost to own a fuel sipper has never been better and Honda's 2012 Cost of Ownership award from KBB shows how amazingly low it can be.
Advertisement

In the United States our daily news, both local and national, reports endlessly, and in amazing detail, about the price changes in the cost of gasoline. If gas goes up ten cents it is a filler story used to make up the half hour (or about 19 minutes of content) the viewer will see. If the cost goes up more than that and there is a holiday such as labor day, or another instance of the never ending crisis in the world where people think their gas comes from like Iraq, it might even be the lead story. However, the truth is many Americans pay more for cigarettes or cable television than they do for gas.

More to the point, in the US four or five passenger cars, from the world’s most quality-oriented companies, made well, with incredible reliability that get mid-‘40s or even mid-50s in terms of miles per gallon, are widely available. So why all the fuss? The Honda Insight is a great example of just how amazingly affordable, quality, reliable, gasoline powered cars are in the US.

In a press release today Honda extolled the virtues of owning a hybrid and their point is hard to dispute. Starting at $18,500 the Honda Insight will transport a commuter 22 miles each way to work an use about one gallon of gas. That is less expensive than a Venti Skim Latte at Starbucks. It costs less than half of one pack of cigarettes You cannot get a foot-long sub at your favorite shop for that cost, and if you take a train, you will likely pay more for your ticket. If you have Comcast cable and you have internet and cable you are paying more for that service each day than you do for gas. (our examples, not Honda’s).

The Cost Of Ownership Award by Kelly Blue Book reminds us that there is more to the cost of ownership than gas. In fact, vehicle depreciation is the highest cost on the list of items we pay for. That is great news for hybrid owners because hybrids retain their value better than average. Insurance and taxes are also high on the cost of ownership list. Again, a car costing under $20K that is a real slowpoke is a two-time winner here. Low insurance rates (compared to say, a Mustang GT) and since taxes are based on purchase price and value, you won’t find a better deal than an Insight or Prius. Both have a great reputation for reliability too, so repairs shouldn’t cost more than any other car.

As if this deal were not good enough many hybrids actually take a little bit of money from your neighbor’s wallet and put it in yours. Tax rebates funded by state and federal tax income are almost so common now they are simply assumed. “My car is a hybrid, you should help me pay for it” is one way to say it.

Hybrids have matured now and it is hard to argue that they don’t have the best cost of ownership compared to electric cars, gasoline powered economy cars, or even a pack-a-day habit.

Tesla Contemplates A New Strategy for China Retail even As Sales Boom
Jay Leno on Elon Musk & EVs: “I Think He Should Get ... Credit"
END_OF_DOCUMENT_TOKEN_TO_BE_REPLACED