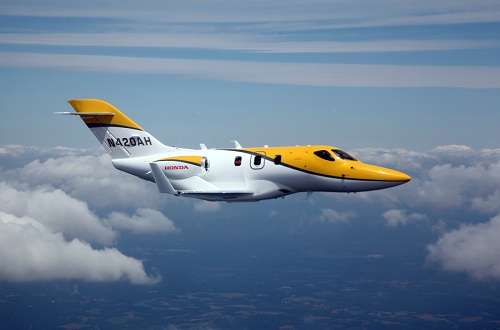 Fans of Mad Men know that when Sterling Cooper Draper Pryce started their new advertising agency the thing they wanted most was an airline. Had they not insulted, and then kicked out, Honda (at that time a motorized bike company) due to Roger’s WWII Pacific Theater rage, they would now have one. Yes, Honda is an airline manufacturer. What began formally at Honda in 2006 after 20 years of research and development on the side, has now come to the point where Honda has four aircraft for testing.

See if this sounds familiar. Honda’s product will be:
- Smaller than its competition
- More fuel efficient than other similar products
- Quieter than the current products in the market
- Uses "outside the box the thinking" with regard to engines
- No threat to anyone, just quietly making a small non-threatening little product…
By all measures Honda is following its playbook from the motorcycle, automotive and residential power products success to enter the airplane business.

This is Honda’s third flying aircraft, as one is used for ground based testing. Previous flights tested the performance envelope, flying to 43,000 feet and achieving a speed of 420 KTAS (knots True Airspeed – just think miles per hour). This flight seems to have been more a test of the aircraft in a regional jet scenario. The pilots flew to 11,500 feet and kept the speed in the cruising speed range for about 74 minutes (the time it takes to fly from Boston to New York perhaps?). Stefan Johansson, pilot-in-command was quoted as saying “The stick shift is probably the best in the world. When the engine switches cam lobes at about 5,000 RPM, and the V-TEC system kicks in, this baby really scoots.” (No of course he didn’t say that!) However, Michimasa Fujino, President and CEO of Honda Aircraft Company did say in a press statement "The first flight of F3 shows the steady advancement on our course toward delivering to our customers an aircraft that offers not only superior performance, efficiency and comfort, but also superior quality,"

If history is any guide, it will not be long before business people taking regional flights become used to seeing the yellow planes with the engines mounted up and back from the wings.