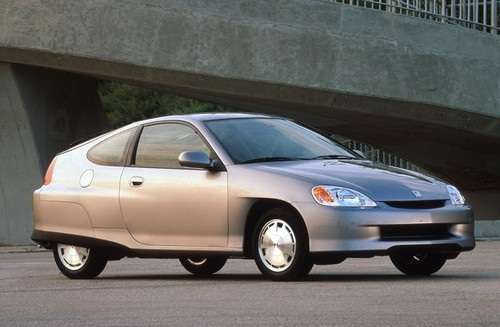 In 1999 Honda launched a vehicle in Japan that started a small ripple that has become a tsunami in America. The Honda insight first sold in the Japanese market about 2 years after Toyota’s Prius entered that market. However, it was Honda that took the first steps into the US market, which was seen as a less likely successful market for such a vehicle. Insight was a subcompact, teardrop shaped, two-seater that could return 82 mpg according to Honda. Other sources say low 70s. Both are equally incredible. The Insight was the first real fuel miser that was a daily driver available for sale to the masses in America. Its incredible mileage is only now being challenged by other hybrids after all these years.

The Honda Insight model has waned in popularity, but that isn’t as bad as it sounds. Although Honda sold only 246 Insights in the US September, and by comparison almost 30,000 Accords, the technology that made the Insight such a breakthrough has started to seep into all of Honda’s models. Hybrid Civics and other models bump Honda’s monthly sales of hybrids into the 1200 or so per month rate. More importantly, regenerative braking returning power to a battery, and other elements of hybrids, have now started to be found on vehicles not called hybrids. Still the fact remains that all hybrid models are just one percent of Honda’s overall sales. Honda’s only electric vehicle, the Honda Fit EV sold 16 units America in September, its first month of sales.

General Motors, Ford, Chrysler wer part of the original consortium to develop a High Efficiency Vehicle. The plan was for the US DOE, and another government agency, to bring "the big three" together to create a much more efficient vehicle for the US market. The idea of gas-electric hybrid had been considered before, but this was the first effort to truly focus on a mass-market product as its outcome. The program failed in most respects, however, the technology found its way over to Honda and Toyota where it was welcomed. They ran with it themselves each coming up with a different flavor of the same recipe. Interestingly, although it didn't go forward in the early stages, GM has since done some incredible things with hybrids including creating hybrid trucks (not as crazy as it sounds given that trucks and heavy SUVs make up half of all vehicles sold in the US) and of course the ultimate hybrid, the Chevy Volt. The Volt uses its gas engine only when needed to charge the batteries on board. GM now downplays the use of hybrid drivetrains in many of its vehicles preferring to instead call the technology eAssist.

Honda has always been a brand with vehicles that lead the way in efficiency. The one millionth hybrid is a testimony to its long commitment to building high fuel mileage into all of its products.