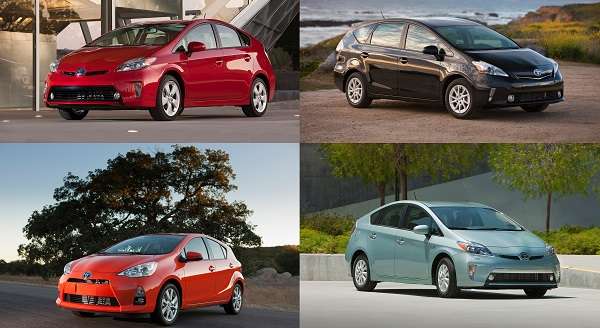 US monthly sales rate of leading EVs and hybrids dip over the past couple of months. Prius down shockingly compared to prior year.
Advertisement

Torque News readers know that my work often has a cautiously pessimistic view of green car sales. Although that is true, there is no denying that the rate of sales in the US of EVs and hybrids has dipped dramatically in the US over the past couple months. Through the second half of 2013 sales were consistent, but January and February of this year were much lower than the monthly run rate that green cars had established. In January automakers and fans of EVs claimed that the extremely low temperatures and “polar vortex” winter were the reason for slow sales. “Just wait” they said. Well we are still waiting.

Something is up with the Prius. Sales of the Prius family were down just a bit in December over the prior year’s December, but in January and February sales have gone off a cliff. The Prius family is down about 30% overall. The sedan is down 35% on a daily sales rate basis. Part of this could be due to Toyota stepping back from fleet sales (sales to municipalities and organizations). The special stickers that allow hybrids into some restricted high occupancy travel lanes in California have not yet run out, but that is about to be an interesting issue. The Prius is still the best-selling green car in the world, the US, and in California, but lately sales are scary-bad by comparison to previous months.

To put the drop in sales of the Prius into perspective, its monthly sales rate decline just in February was 4,032 vehicles. That number is larger than the February sales of all the purely electric vehicles for sale in the US combined.

Tesla is doing great, and the news about that luxury EV brand is nothing but exciting. However, look closely at what Tesla is saying and you will see that there is no projected sales increase for the US this year. Model S production capacity is projected to be up about 30% for this year, but most, or all, of that added production will be sold to markets other than the US. This story is about US green car sales. The Tesla Model X has been pushed out to 2015.

EV fans look at sales in an odd way. Although EV advocates will often say we shouldn’t look at EVs in comparison to traditional car sales, they like to do exactly that whenever I point out that on a monthly sales rate basis EVs have dropped off a cliff as well. Since EV price supports are increasing, more models enter the market all the time, and since the MSRP of popular models continues to decline, it seems to me EVs should be growing each month on a steep curve. They are not. Fans prefer to instead look to the prior year’s sales, like ICE car makers do. So there are two ways to view sales of EVs right now.

The on-line publication Inside EVs does a fantastic job of breaking down the EV segment (including plug-in hybrids) in their monthly tracking report. I look at the combined electrified vehicles sales for this past January and February of about 12,500 vehicles and note that in 2012 this group of green cars had better back to back months than that. Last year EVs sold terribly in January and February as well, so perhaps there is a strong seasonal effect for EVs, possibly tied to their ginormous tax rebates ($12,500 in Georgia for example).

The new Prius is coming in about 10 months. We should soon be learning more about that important car, and also possibly seeing some sales promotions to move the current generation. That could help bring the Prius back to its prior sales level. The BMW i3 is also about to begin its US sales. That model has a very passionate fan-base and we suspect the model could very well leap to the forefront of green car sales –if BMW can build enough to satisfy a robust demand.

Hopefully March will be very strong for green cars and this trend will reverse. Perhaps the BMW i3 will spark some renewed US interest in green cars. The segment badly needs a jump start.