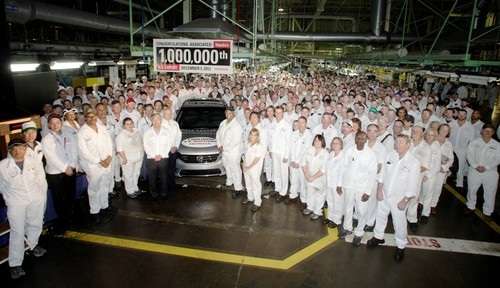 In the month of November three automakers, General Motors, Honda, and Mercedes Benz all reached important milestones in their global sales. What makes the sales figures and milestones interesting is that none of them occurred in their home market, that being the country where the company is based.

General Motors is a Chinese Automaker
General Motors is quickly becoming a Chinese automaker that dabbles in its home market to secure financing and support of its more profitable, overseas operations. In the month of November, General Motors sold 260,018 vehicles in China. Year to date, GM has already passed last year’s sales number of about 2.5 million vehicles sold into China. Contrast this with the GM sales in the US in November of about 186,000 vehicles and it is clear to see which market is more important to GM in terms of sales and profitability. That figure was also a record month for GM, so the month to month comparison is not a fluke. GM sells more cars and trucks in China than in the US – by far. Buick in China is a huge brand for GM and in the month of November GM sold 70,000 Buicks. Hold that number in your head for just a bit.

Mercedes is a tiny American car company
In November, Mercedes Benz sold about 32,000 vehicles in the US, including its commercial Sprinter work vans, shattering its previous monthly record. OK, now pull out that 70,000 vehicle Buick number GM sold in China last month. GM sells more than twice as many Buicks (just Buicks) in China than Mercedes Benz sells vehicles in the US. Is that something most people would know, or realize given the huge presence Mercedes has here in the US? If we broke out the numbers and compared just sedans and sport utes, the number is more like three times as many Buicks into China than Mercedes into the US. Mercedes president and CEO, Steve Cannon, is thrilled with this result saying "As the post-storm rebuilding gets underway, we're seeing a strong sales pace for the industry at large which will carry MBUSA to its highest year on record.” Can one even get one’s brain around the fact that the person responsible for Buick in China is responsible for about twice the business that the person responsible for Mercedes in the US is?

Honda is a US automaker that exports its vehicles to Asia
Honda built its one millionth vehicle in the US for export to overseas markets this month. The Honda Accord it built as number one million is headed to a dealership in South Korea where it will lure buyers who want an option for the domestic version of the Hyundai Sonata. On a similar note, all Honda Accords sold in the US are now built in the US. It is hard to think of Honda as a foreign car company doing business in the US given these facts. This sales trend is no accident. Honda has for decades been increasing its operations in the US and decreasing its operations in its home market. Takanobu Ito, president & CEO of Honda Motor Co., Ltd., said in a video message "Quality for the world, made in America, has been an important Honda commitment for the past 25 years. In the coming years, we will take on the challenge of helping even more customers around the world enjoy Honda products made in the USA."

As the economy rolls along on its sine wave of good and bad times it might be wise for the US voter, car buyer, and worker to stop and think about who deserves their support both politically and financially.