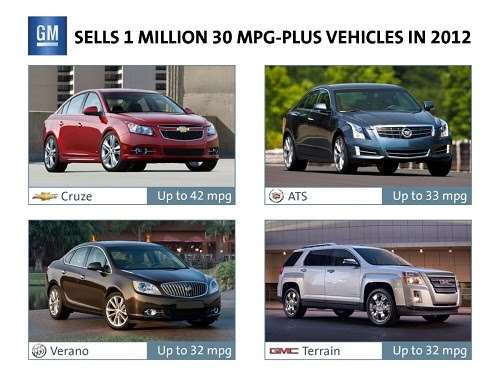 General Motors is best known for its Chevy Silverado and GMC Sierra trucks, but the company is making a strong push into fuel efficient vehicles. In a press release today General Motors has announced that its tally of 2012 vehicle deliveries shows that it has delivered more than 1 million vehicles this year that get 30mpg or better highway mileage. Unsaid is that GM also is a world leader in fuel in-efficient vehicles and those have also had sales gains in 2012.

GM Offers Many Choices Of Fuel Efficient Vehicles
Customers wanting to buy American and drive a fuel efficient vehicle certainly have a lot to choose from all of a sudden. Ford has gone all-in with full hybrid and plug-in hybrid technology. General Motors also has those vehicles for sale, and of course has the Volt electric vehicle, but GM has gone strongly into light hybrid technology as well. GM calls its light hybrid technology e Assist. Found in vehicles like the Buick and Chevy sedans currently for sale, the eAssist uses some of the hybrid technology found in classic hybrids like the Prius, but does not go the full hybrid treatment. This keeps costs down and improves the driving experience. Mark Reuss, president of GM North America elaborated on this point saying, “Our investments in advanced powertrains are clearly paying off, and our smaller vehicles are resonating with customers. In 2013, we'll introduce new diesel, eAssist and plug-in vehicles in the United States and expand the availability of turbocharged four-cylinder engines. This will give us the most technologically diverse range of fuel-efficient cars and crossovers in the industry.”

GM Is Also A Leader In Fuel In-efficient Vehicles
General motors is also a world leader in fuel in-efficient vehicles. As of the end of November GM had sold almost exactly the same number of Savannas as it had Volts. Have you ever heard of a Savanna? The Savanna gets about 10mpg city when run on gasoline. When run on E85 they get about 7 mpg city. Savanna sales are up about 31% over 2011. The biggest seller for GM by far is its Chevy Silverado and GMC sierra pickup trucks. GM sold about 450,000 of these vehicles in 2012. These trucks get between 13 and 15 mpg in the city. The truck platform is also used on giant sport utility vehicles like the Cadillac Escalade and Chevy Suburban. Overall trucks and full sized sport ute sales were up robustly in 2012 and GM sold about 800,000 of these vehicles, of which, almost none get more than 20mpg combined City/highway. GM did have a hybrid truck for sale that could break 20mpg, but it has been discontinued.

2013 will certainly see gains in sales of vehicles with impressive highway mileage numbers, but will the hype equal the actual savings? What many policy makers know, but don’t like to talk about, is that small improvements in the mpg of the biggest sellers can save a lot more fuel than selling a handful of super-efficient vehicles can.