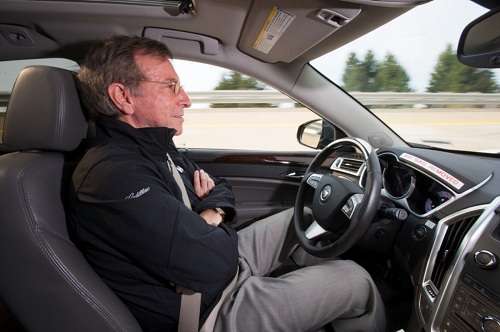 The geek-mobile we all envisioned is ready, but the first cars to market that drive themselves are the coolest cars in the marketplace.
Advertisement

Most of the stories that have been written about self-driving cars show the Google car, or some other fuel-sipping hybrid car puttering around doing good deeds. The technology required to have a vehicle drive completely by itself is now available, and cars that don’t require the driver to do more than speak the destination could be for sale, but the public isn’t ready for that yet. However, cars that drive themselves are for sale now, and many more will arrive later this year. The surprise is that they are not the geek-mobiles we have all been expecting. Instead they are some of the most powerful, and desirable vehicles in the market, and you will recognize them all.

Cars that can parallel park themselves are now old news. This was the first way automakers started to provide us with cars that take over and drive. There are so many on the market that we won’t even bother to name names. We wonder if driving tests will still bother to ask drivers to do that anymore after the first few hundred 17 year olds say “Cool” and hit the self-park button. We don’t force drivers to take the test in a manual transmission car, so why should we make them park if the technology only requires a touch of a button or verbal command?

Systems that will keep you from hitting a pedestrian in the city, like Mazda’s Smart City Brake, are now old-hat too. There are cars for sale at the $30K price point now that will automatically brake if a pedestrian or other obstacle appears in front of your car at city speeds, so this is not just luxury car technology anymore. The Infiniti JX crossover with Back Up Collision Intervention was the first to market with automatic back-up stopping. These technologies in combination will keep you from hitting things in front of you or behind you, but they are not completely self-driving are they?

Self Driving At 75 mph
This story is about bolting down the highway at 75 mph while the car steers and also accelerates and brakes the car. The new Cadillac you shop for later this year will have that option. Called Super-Cruise, it is just what it sounds like and the photo here is from Cadillac. You will soon be able to set the “Cruise Control” to drive for you and the car will steer as well as match speeds with the traffic ahead of you. That is self-driving at high speeds. Cadillac tested the car’s settings on the Brooklyn bridge. This isn’t for driving to Las Vegas along a lonely stretch of dark desert highway.

Let the Car Handle the Commute
BMW has new technology available for sale on the new X5 that self-drives for you in city-style stop and go commuting. Traffic Jam Assistant takes over the drudgery of the long slow crawl to the office so you can check out your Facebook posts, get caught up on some e-mails, apply make-up, shave, or make a phone call or two or ten. You are doing that stuff anyway (I saw you in traffic the other day, don’t deny it!), so why not get a car that can drive safely while you are too busy?

So taken together we have cars that can now drive for you on the highway, drive for you in traffic, and can stop the car from hitting things in front or behind, and also parallel park. What’s next? Next will be a car that can drive you to safety if you pass out or have some kind of medical emergency. Then cars that can valet park themselves. That is the dream of every car-lover with a ride they view as special. Nobody likes to hand the keys to a valet. How much better things would be if the restaurant’s valet area simply had an icon to select on the nav system.

If you envisioned a self-driving Prius with gadgets all over it poking along in the slow lane we are sorry to disrupt that image. Self-driving cars are here right now and they look like supercharged Cadillac CTS-Vs blasting past you in the fast lane, BMW X5s with twin turbo V8s ahead of you in traffic, and Infiniti JX luxury crossovers backing towards you (safely).