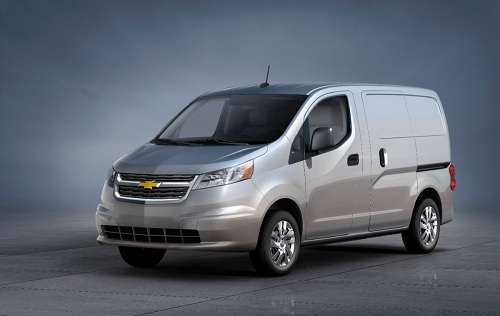 Wanting to compete with the Ford Transit Connect, Chevy found a partner in Nissan. Will the Chevy dealers and the Nissan NV200 product be a winning combination?
Advertisement

General Motors has chosen not to build its own small work van, but rather will private label the hugely successful Nissan NV200 for sale in the US. Contractors like plumbers and electricians may still require large work vans, but more and more service people are driving much smaller, more fuel efficient and cost effective, work vehicles. Ford has either caused this trend with the Transit Connect, or it was ready when the demand hit. Either way, if you haven’t noticed yet, the work van that comes to your house to fix your cable, your dishwasher, or your pool is likely to be much smaller than you remember form the last time.

The Ford Transit Connect is made in Turkey by Ford and has become a staple for modern service personnel. Chevy had nothing in the pipeline like this and it is now caught without a product to sell to its many loyal commercial customers in the US. Nissan has an excellent small vehicle ready to compete with the Ford Transit connect, but it does not have a large loyal pick-up truck and work van customer base returning to dealerships looking for a more cost effective vehicle. This is a match made in heaven and the two have come together to sell the Nissan NV200 via the massive GM and Chevrolet commercial vehicle network.

Called the Chevrolet City Express, the new jumbo shrimp of the work truck market will be based on the International Van of The Year Winning NV200. You might remember the NV200 as also having won the Taxi-of-Tomorrow contract with the City of New York. The NV200 has so many features a cab customer could want they are hard to list. Easy ingress and egress, plenty of space for passengers with hand-bags, and plenty of rear cargo rom are just the top few reasons the NV200 took the contract away from the “domestic” manufacturers. The NV200 also is doing well as a Taxi in England, despite its break from the traditional look of its beloved cabs.

Commenting on the marriage of convenience, Ed Peper, U.S. vice president of GM Fleet and Commercial Sales said “Our fleet customers have asked us for an entry in the commercial small van segment, so this addition to the Chevrolet portfolio will strengthen our position with fleets and our commercial customers,” said. Joe Castelli, Nissan vice president, commercial vehicles and fleet, expanded on that saying, “Working with partners to expand markets for our innovative products enhances Nissan’s growth and manufacturing efficiency by leveraging our capacity to meet growing demand in this space.”

This merger of a great distribution network with a great vehicle was not uncommon in past decades, but lately the larger manufacturers have been going it alone. This could be the first of many smart cooperative agreements between the giants to better serve their customers without all having to copy every vehicle in the market.