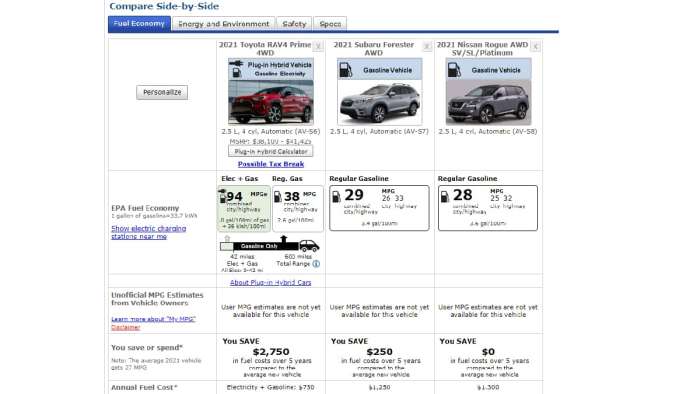 The Toyota RAV4 Prime has a huge advantage in power and efficiency compared to the Subaru Forester and Nissan Rogue.
Advertisement

The 2021 Toyota RAV4 Prime plug-in hybrid-electric vehicle has significant advantages over the Subaru Forester or Nissan Rogue. Let’s start with power. The RAV4 Prime offers its driver 302 hp. By contrast, the Forester’s top-trim only has 182 and the Rogue’s top trim offers just 181 hp. In days gone by, more power was usually equated with lower efficiency, but that is no longer the case. 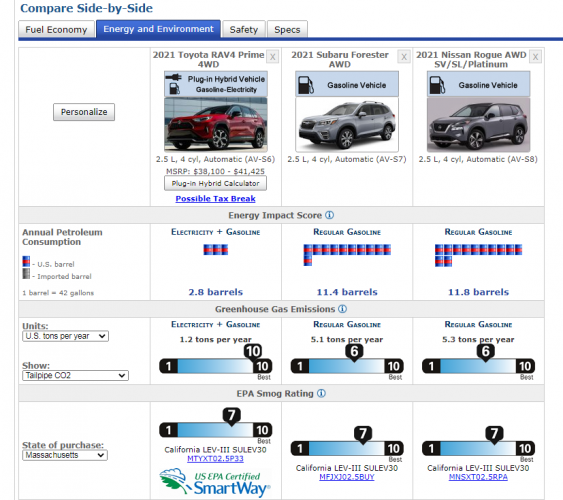 The RAV4 Prime offers an MPGe value of 94. By contrast, the Subaru Forster has an EPA-estimated Combined fuel economy of 29 MPG and the Rogue’s top trim 28 MPG. The RAV4 Prime has all-wheel drive standard, like the Forester, but we used the optional AWD trim of the Rogue for our comparisons here. The RAV4 Prime’s energy advantage equates to a $5,000 savings for its owner over ten years. But that’s not all it saves.

The EPA says the RAV4 Prime will consume 3,612 fewer gallons of gasoline over ten years. That equates to a whopping 39 tons less CO2 over ten years than the Forester or Rogue will produce. The RAV4 Prime scores a ten/ten for CO2 production, the best score the EPA awards.

You may be wondering at what cost the RAV4 Prime comes in at, given its huge advantages in power, fuel savings, and pollution savings. We broke down the cost of the RAV4 Prime and included the $7,500 tax incentive it comes with. The result was the SE trims starts at $30,300. The top-trim RAV4 Prime XSE starts at $33,450. By contrast, the Forester Limited has a price of $35,945 and the Rogue SL AWD a price of $34,495. One last comment on the RAV4 Prime's value by comparison to these two worthy peers. Like all Toyota's the first two years of maintenance are included in the price.

Check out the full review of the Toyota RAV4 Prime.
Data and charts courtesy of www.FuelEconomy.gov.