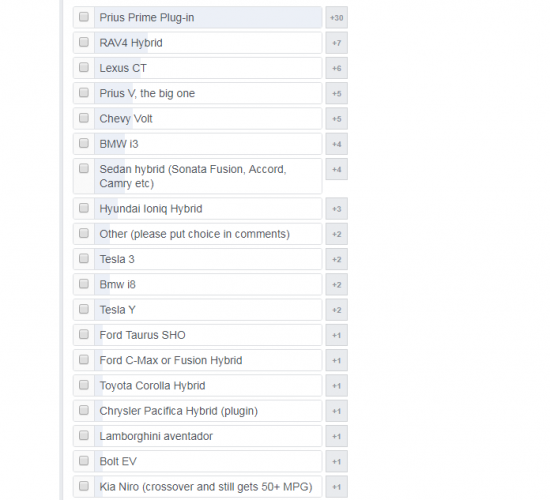 We polled Toyota Prius Owners to see what other vehicles they consider when shopping for a new car. The bad news for other green car automakers is that they almost always opt for other green Toyotas.

Prius Alternatives - RAV4 Hybrid
As the Toyota Prius sees declines in sales, the question is, what are green car buyers driving home from new car dealers instead? We think we know the answer, and we outlined the case that the Toyota RAV4 Hybrid is the car that most of the former Prius shoppers are driving home. The numbers match up almost perfectly, and as we all know, cars have jumped the shark. Drivers want crossovers and green vehicle drivers want green crossovers.
- See our prior story: 2016 Toyota RAV4 Hybrid Answers Question - Where Have Prius Sales Gone?

Prius Alternatives - EVs
Surprisingly, very few owners of Prius cars are looking at battery-electric cars as alternatives. However, we should point out that the poll asked Prius owners to tell us what vehicle that they could take home now they would consider. As we all know, the Tesla Model 3 is more than a full year away, possibly two years away, for anyone not holding a reservation.

Our Poll
We polled members of the closed group, Toyota Prius Owners Club. One member of our staff is a Prius owner and the Admin of this very popular club on Facebook. Another is a moderator. Our question was "If you were shopping for a new vehicle right now (Car must be for sale from inventory today), not a dream car, a real one you might really buy, what vehicle might you actually cross shop against the Prius?" Of the over 2,000 members, about 70 replied to the poll by checking the box next to a car, or adding one if it was not on the list.

Biggest Surprise - Hyundai Ioniq
Our biggest surprise was the Hyundai Ioniq's poor results. The Ioniq is an exciting new hybrid from Hyundai that we have tested and loved. However, Prius fans seemed cool to the idea of the car. It is not a lack of familiarity. Multiple reviews of the Ioniq by Moderators at the group have been posted. The many mass-media reports that the Ioniq "Out-Priused the Prius" may be a bit premature.