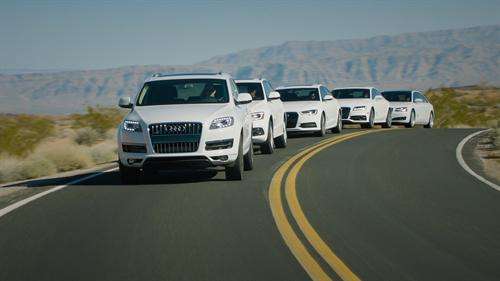 Audi expands its diesel option to the A6, A7, and Q5. Great news for those who like to use viscous fuels, but these beg comparison to Audi's own gasoline vehicles and the Tesla Model S and Model X.
Advertisement

Audi released facts and figures today related to its 2014 line of diesel vehicles in the US. The A7, A6, and Q5 will be offered with the diesel like it is now in the newly introduced A8 and Q7 diesel. The addition of the diesel in these three models means that Audi customers interested in performance and fuel economy now have some interesting choices.

All three of the new vehicles will use Audi’s six-cylinder TDI engine. In car-speak TDI roughly translates to “Turbo-direct-injected.” As opposed to TSI, which in Audi-speak translates to “forced induction gas engine with direct fuel injection.” The diesels are always marketed now with the term “clean diesel” attached to remind us that, unlike the cars were behind for decades that spewed particulates and oxides of nitrogen in to our cabins and lungs as we followed them up hills, these new diesels are not dirty rotten polluters anymore. In fact, many green-living advocates are also big fans of diesel. Some car enthusiasts are too because diesels produce a lot of torque. Not a lot for the money, but a lot for the fuel used to make them go.

Here are two cool facts to impress your neighbors: Fact one - the Audi Q5 TDI (diesel) gets better fuel efficiency than the Audi Q5 TDI Hybrid. We were careful to say “efficiency” and not “fuel-economy” because if you factor in fuel prices things get a little less clear which is better in terms of fuel economy. Fact two – The Audi A7 TDI (diesel) has more torque than the stupid-fast Audi S7 4.0 TFSI (V8, turbocharged etc.) gasoline powered executive land-shark. Diesel is one of those disruptive technologies in the car world that tends to set the preconceived notions on their head.

In the A6 and A7, which are basically the same car, but one looks awesome and sells for about $75K and one looks just pretty good and sells for about $60K, the diesel powertrain and 8 speed transmission are able to achieve an EPA estimated 29 MPG combined and 38 highway. That is pretty darn good fuel efficiency if you don’t follow such things. On the road the cars feel snappy and are able to hit 60mph from a dead start in the mid- 5 second range. The diesel price premium is significant. You will never get that money back versus buying a gasoline version of the A6 or A7, but if it helps you sleep to think you prevented a few tons of CO2 from going back into the atmosphere, cool.

The Q5 is where the diesel engine makes more sense. Sort of. Here are the starting prices of the three basic Q5 cars: Gas powered = $36K. Hybrid = $51K. Diesel = $47K. Trying to match up Audi vehicles exactly is like doing trigonometry with a buzz, you think you are on to something, but then it all seems to get confusing again. Our guess is that if putting the most into your child’s Ivy League college fund is the main priority the basic gas powered car is by far the most cost effective. If the environment is your main priority then either the Hybrid or diesel are the better choices. Unless you step back and ask why you are buying a liquid fueled vehicle in the first place. At least Audi gives its customers all 3 of the liquid fueled options.

On that note, and having just driven a Tesla Model S, it bears saying that the Audi S7 and Audi A7 TDI are the most direct competitors to the Tesla Model S in the marketplace. They have almost exactly the same dimensions, they look alike in the way Ashley looks like Mary Kate, and they have very similar performance. In fact, they also have a similar initial cost when you factor in tax rebates for the Teslas, and they have almost the same cost of ownership. The new TDI version of the A7 lands right in the middle of the Tesla Model S line-up. Even cooler, when and if the Tesla Model X joins the party next year, the Q5 TDI crossover will look a lot like that Tesla and also have a very similar performance and cost of ownership model. We don’t think that is an accident. It would not surprise us one bit to find garages of the most affluent Americans with one of each brand in the near future.