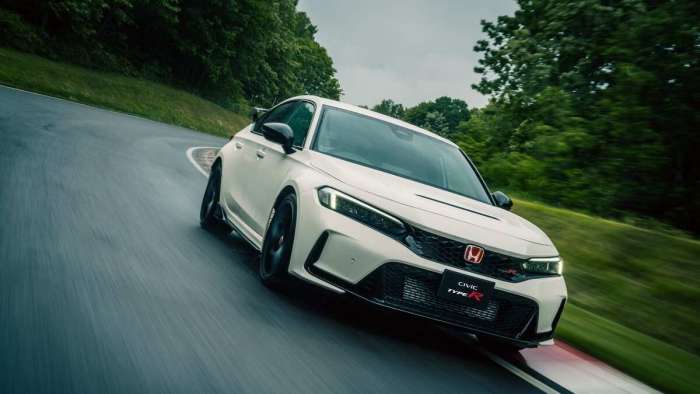 All-New 2023 Honda Civic Type R Gets One Big Upgrade - Can You Guess What It Is?

The Honda Civic Type R turns 30 this year and gets a big upgrade.
Advertisement

What do the Subaru WRX, VW Golf Type R, Mazda3 Turbo, and Toyota GR Corolla all have in common? A lot of things. Let's list them out;
-Powerful turbocharged engines
-Manual transmissions
-Four Doors
-All-Wheel Drive

The all-new Honda Civic Type R jumps into this mix again for 2023. We love the Civic in all its iterations. There is no better value for sporty, practical, safe, reliable fun. We have had a chance to test past Civic Type Rs and came away impressed but also a little perplexed. The impressive part is the suspension tuning, ergonomics, value proposition, and looks of the Type R. The perplexing part is the power delivery. Front-wheel drive just doesn’t handle 300 hp and the accompanying turbocharged torque well in real-world situations.

Honda adds even more power this year. The Civic Type R is expected to have 320 hp (the prior Type R had 306). This is from a 2.0-liter engine, no less. It’s cool how small turbos ended up ruling the affordable fun segment. 320 hp is more than enough peak power to make a lightweight car the size of the Civic a blast to drive on lonely country roads.

"Even in this "year of the Honda SUV," it's great to be part of a brand that remains focused on the thrilling performance and joy of driving delivered by the all-new Civic Type R," said Mike Kistemaker, assistant, vice president of Honda sales at American Honda. "Type R is about more than speed, power and handling. It's how a great car makes you feel that really matters and that's what the all-new Civic Type R is all about."

320 hp is also enough power to make a quick start a lot of fun. But only if you can put the power down to the ground effectively, smoothly, and instantly. Are two (front) driven wheels enough to harness this level of power? There is no single answer to this. Honda clearly thinks the answer is “yes.”

We want Honda to be right about that. We understand that Honda does not have an all-wheel drive option for the Civic (nor does Acura have AWD for the Integra). In the sporty fun, but not extreme trims like the Sport and even the Si, that is understandable. But in this segment, AWD is sort of a starting point, not a feature.

Honda points to its recent record-setting course time at the Suzuka Circuit in Japan. So, the Civic is a fast car in the hands of a pro driver on a closed course. However, we can’t help but wonder how fast that driver would be in a car that had AWD. Maybe it doesn’t matter.

Tell us what you think in the comments below. The all-new 2023 Civic Type R is expected to debut at dealers in the coming months and be priced near $40K.